VW Golf GTI vs VW Golf GTE review - is the hybrid hot hatch up to scratch?

Can a hybrid hot hatch really be better than its conventionally-powered equivalent? We drive the Golf GTI and GTE back-to-back to find out. 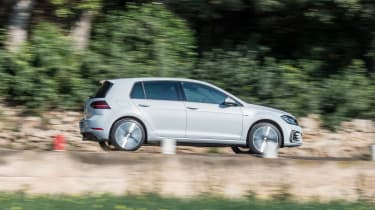 There are rumours that, in the not too distant future, the VW Golf GTI – the hot hatch staple by which all others are measured – will become fully electric. Purists and diehard Golf GTI fans will fervently object to the concept, but to ease us into such a radical development, VW has produced the VW GTE: a part petrol, part electric hot hatch. Here, in its facelifted and updated ‘Mk7.5’ form (the white car in these pictures), is it good enough to tempt the more progressive car enthusiast away from buying the petrol-powered norm? VW’s refreshed Golf GTI Performance (the red car) is the ideal yardstick to help us answer such a question.

The GTE’s drivetrain comprises a 75kW (101bhp) electric motor that slots between a 148bhp 1.4-litre four- cylinder turbo petrol engine and a six-speed twin-clutch gearbox that sends drive to the front wheels. The result is respectable, if not astounding, with peak combined outputs of 201bhp and 258lb ft of torque, and a 0-62mph time of 7.6sec. As well as boosting the GTE’s performance, the electric motor also allows the hybrid to drive 31 miles without resorting to the petrol engine. That distance is only achieved if its batteries (mounted beneath the rear seat) are fully charged, which you do by plugging the GTE into the mains via a socket behind the front badge.

It’s not the hardware or figures that suggest that the GTE is more than just an ordinary hybrid; its shared bodywork and GTI-like details write the biggest cheques. Its purposeful stance, rear spoiler and deep front bumper mean the GTE looks every bit the typical hot hatch. Inside, its sporting intentions are less overt, with little more than some bright blue stitching around the steering wheel to add sparkle to the plain-looking but high-quality interior. This sense of class continues as you pull away, the electric motor spiriting you along silently while the controls and ride give an overriding sense of solidity.

Ordinarily, it’s disappointing when the petrol engine of a hybrid car sparks into life – hybrid hypercars notwithstanding. There’s usually a nasty bark of a weedy motor accompanied by a lurch as the two power sources unwillingly work together to maintain momentum. The GTE, on the other hand, seamlessly feeds the internal combustion engine into play; it’s so gradual and unobtrusive it’s as if the engine starts just one cylinder at a time so you’re barely aware you’ve woken it.

The hybrid Golf’s aptitude at transitioning between electricity and petrol almost makes you reluctant to engage its sportier mode, but press the ‘GTE’ button alongside the gearlever and the car uses both of its motors to increase performance rather than improve efficiency. This hardly transforms the GTE, though: it accelerates in a purposeful rather than shocking manner, just as it does in its more efficient default mode. The most notable difference is a more pronounced synthetic rumble from the engine and through the speakers.

You do sometimes feel the instant shove that’s typical of cars with part-electric or fully electric power, but in the GTE the sensation is rare. Because the electric motor sits between the engine and the gearbox, you often have to wait for the DSG ’box to shuffle into a lower ratio to feel the true performance on offer, and such acceleration is less impressive if there’s a delay before it’s deployed. However, if you select the correct gear manually and apply the throttle when the engine’s revving between 2500 and 3000rpm, being very careful not to encroach into the kickdown stage of the accelerator’s travel, you do get that sudden electric boost. So many elements need to slot into place before you can experience this, though, that trying to utilise it while tackling a twisty road is impossible. 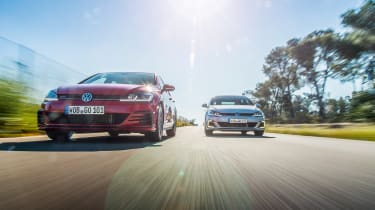 But then the GTE’s chassis, while competent, doesn’t encourage spirited driving, so punchy, instant acceleration seems less of a necessity. A touch too much roll means a certain amount of slack needs to be taken up before the GTE wants to change direction. It suits a more relaxed driving style, to which it responds in a fluid manner.

Overcome that urge to drive sedately and an interesting characteristic is unveiled. The energy recuperation that occurs the moment you lift off the throttle works like very aggressive engine braking, so coming off the accelerator abruptly when you’ve got steering lock applied can unsettle the rear of the car. Not in an immediate or snappy way; instead the rear begins to arc slowly around before the stability control – which cannot be disabled – cuts in and straightens things out. Ordinarily such tight restraints would be frustrating, but rather than manifesting themselves as useful adjustability to correct your line, the GTE’s on-limit tendencies feel more like a slide that might build into something not so easily managed without a helping hand from the electronics. The GTE, then, leaves plenty of room for the GTI to shine.

The GTI Performance’s turbo 2-litre four-cylinder engine is much more typical of a modern hot hatch. It’s 242bhp – up 15bhp from the old Performance Pack GTI, and from the latest regular GTI too – is also much closer to par than the GTE’s output, as is its 6.2sec 0-62mph time.

As with its exterior styling, the GTI’s interior is almost identical to the GTE’s, but where there is blue in the hybrid the petrol gets splashes of red. The real differences between the two emerge the moment you start driving. The GTI simply can’t match the part-electric Golf for low- speed comfort; the ride is more fidgety and the thrummy engine noise – effectively the same sound as the GTE’s engine in its performance mode, albeit lower in pitch – is frankly annoying once you’ve become accustomed to the serenity of electric propulsion. 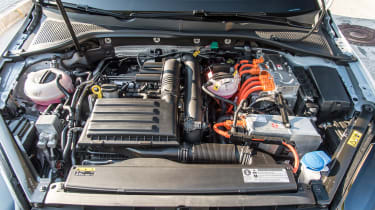 However, the GTI is much better suited to an environment outside towns and cities, and at the first hint of a corner it shows how much more lithe and alert it is compared with its hybrid brother. The quoted weight for the GTI is 228kg lighter than the GTE’s, and you can feel the benefit in the GTI’s willingness to change direction.

This lack of mass means that, despite the GTE’s supposedly instant torque, which only an electric motor can provide, the GTI responds more enthusiastically to throttle inputs. It pulls really hard as you exit a corner, and its standard limited-slip diff allows you to get on the power very early. The way the GTI drives is much more transparent than the GTE and that sensation is multiplied by its manual gearbox, not even an option on the hybrid.

The simplicity of its drivetrain, predictability of its chassis and the alertness of its responses make the GTI a much more natural car to drive at pace, but where the GTE starts to squirm and writhe, the conventional hot hatch shows no signs of letting you see its wild side. Really pushing the GTI doesn’t open up a layer of intimacy with the car, and neither the throttle nor even trail braking seem to allow you any access to more malleable, engaging behaviour. It remains resolutely stable, a commendable attribute, but not one that endears it to those who like to feel they have an influence on a car’s attitude. 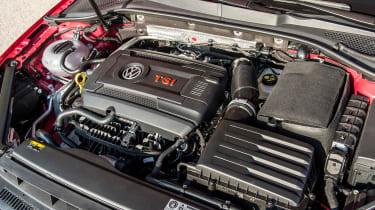 The GTI is a better and more credible performance car than the GTE, but it has been left behind by the current crop of hot hatchbacks in terms of pure fun. Rivals now possess some of the most eager, aggressive chassis setups of any cars on sale, and at any price. As a result, they’re some of the most demanding yet entertaining and satisfying cars you can get behind the wheel of.

Some of those cars have been Golf GTIs, too. As VW itself has helped pushed the hot hatch genre up to its stratospheric heights with the Clubsport Edition 40 and Clubsport S, it seems an inconceivable oversight not to have instilled some of the character from those (now defunct) models into this updated GTI Performance. And if it could also add some of that to a future GTE, a desirable electric hot hatch may be closer than we think.

A very good hot hatch, but a great Golf GTI, the new mk8 excels where required to form a very desirable offering
New 2020 Volkswagen Golf GTI tech insights revealed - plus details on the GTE and GTD

Petrol, diesel and plug-in hot hatches will once again join the Golf family, and could be better than ever