We drive the mk7 VW Golf GTI in basic trim without its Performance Pack. A hot hatch great? 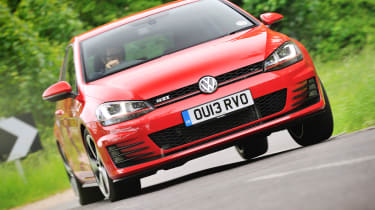 The new mk7 VW Golf GTI in basic trim, without the optional Performance Pack we’ve previously tested (which 30 per cent of UK buyers will choose). It costs from £25,845 as a manual three-door, a five door body and DSG twin-clutch gearbox adding £655 and £1415 respectively.

The new Volkswagen Golf GTI uses the MQB front-wheel-drive platform that you’ll have read about in just about every other VW, Audi, SEAT or Skoda review during the past 12 months. Its suspension is lower and sharper than a standard Golf, however, while (along with the VW Golf GTD) it gets ‘XDS+’, a development of VW’s electronic programme that mimics a diff by braking wheels during cornering. It now works on the rear axle, too, despite the Golf GTI remaining front-wheel drive.

Driven here without the optional Performance Pack (which adds an extra 10bhp, taking the total to 227bhp, as well as adding an electronically-controlled limited-slip differential and bigger brakes), its brake discs measure 312mm front, 300mm rear.The GTI rides 15mm lower than a standard Golf, its suspension multi-link at the rear and MacPherson strut up front.

The 2-litre turbocharged four-cylinder petrol engine, seen in other VW products, has been tweaked to comply with Euro 6 emissions regulations. In this standard guise its total power is 217bhp while torque peaks at a very healthy 258lb ft. The result is a car that feels very quick on road and which will hit a 153mph top speed, via a 6.5sec 0-62 time.

It combines these figures with impressive claimed fuel economy and CO2 emissions, which are rated at 47.1mpg and 139g/km respectively in three-door manual trim. Speaking of gearboxes, a six-speed stick shift is standard, VW’s six-speed DSG twin-clutch paddleshift transmission a £1415 option.

Sometimes British B-roads can be the undoing of a car, and sometimes they can be the making of it. With the GTI it’s the latter. The bumps, humps and general rough and tumble of broken tarmac reveal just how talented the chassis is, as it tracks the road in a display of beautifully controlled damping.

The natural instinct is to put the car into its Sport setting and it certainly feels well resolved and not too harsh, which is impressive. However, if you go into the Driver Profile Selection screen and tap on the ‘Individual’ setting then you can retain the Sport settings for steering, engine, ESP etc but knock the suspension back to Normal. Now you get a little more roll and a tiny bit of float over the bumps, which then lets you get the car moving around a touch more into and through corners, which is lovely. The balance remains neutral, but it’s so easy to place thanks to that stiff MQB platform that you can really throw it around.

Does 217bhp feel slow? When it’s mated to 258lb ft, not in the slightest. In fact it feels stonkingly quick with a delivery that’s really useable and meaty yet still much keener to rev out than expected.

The Golf GTI Performance Pack – £980 pricier – seems a sharper car on first impressions, if lacking a little fun, though we’ve yet to sample it in the UK. Otherwise, the best of the mk7 GTI’s hot hatch rivals are the rear-drive and more powerful BMW M135i (316bhp, £30,570) and the less premium but harder cored Renaultsport Megane 265 (261bhp, £25,255), which is our current pick of the genre.

Also worth a mention is the Ford Focus ST, with more a more playful dynamic character and more potent 247bhp 2-litre turbo four engine, which starts at a ludicrously good value £21,995, though it feels a less premium product than the VW.

Value for money competition comes from within, too, the latest mk3 Skoda Octavia vRS sharing much of the Golf GTI’s mechanical make-up – engine and transmissions included – and therefore possessing similar dynamics. It’s far more practical, though, has the choice of an estate variant and is priced up to £3000 cheaper, starting at £22,990. A new SEAT Leon Cupra lies on the horizon and is likely to follow a similar formula.

The engine sounds a little gravelly with a hint of diesel at first and we couldn't get the trip computer to read fuel consumption near the claimed 47mpg, with about 40mpg being the best we saw, descending as low as 18mpg with enthusiasm.

And while looks are a subjective thing, it’s worth passing comment on just how evolutionary the Golf GTI’s styling is. Those in the know will be able to spot the mk7 from the mk6 and mk5 which share its overall shape, for there are sharper features (the headlights in particular are more aggressive than before, and gain a red strip in them which carries on from the grille) and the alloy wheels are familiar in overall design but with more angular flourishes.

But overall VW has played things relatively safe and you’ll go hunting for the details which set the mk7 apart as opposed to being overawed by new looks. Still, neat touches like the petrol cap, the lines of which sit in parallel with the kick of the rear window and the taillight, emit a sense of attention to detail that helps set the Golf apart from its mechanically similar relations. Quite important when that Skoda is so much bigger and so much cheaper…