How does our current Golf R32 compare to the first one, of 2002 vintage? Neil Carey has a chance to find out 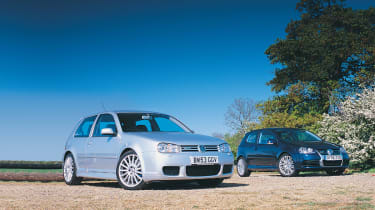 The humble Golf has come a long way in its 33 years. It has grown in every dimension, and it’s the same story with the performance. Back in 1977 the original hot Golf, the much celebrated mk1 GTI, was armed with a measly 110bhp 1.6-litre motor and used (and needed, for that matter) only the front wheels to transfer that power to the road.

Skip forward to today and the premium Golf is no longer marked out by the letters ‘GTI’. It’s now the R32 that tops the range, and it has moved the game on considerably, with an additional 136bhp, four-wheel drive and, if you tick the right box at the dealership, a race car-inspired paddle-operated gearbox.

It needs that extra firepower, though, to counteract the extra 670kg it’s carrying around. In fact, the R32 is so far removed that first hot Golf, so different in its approach, that a comparison between the two would reveal little that you couldn’t already guess. Which is why I decided to get my R32 together with a much closer relation: the original, mk4-based R32.

The first R32 caused quite a stir when it arrived in 2002. It turned up just in time, too. The sporting Golf had lost its way somewhat since the heady days of the ’80s. The mk3 GTI hadn’t set too many hearts racing, and the mk4 was as dull to drive as it was to look at. During this dark period, the prospect of a four-wheel-drive super-Golf sporting a tightly packaged 3.2-litre V6 was good news indeed. The idea of an over-engined Golf wasn’t entirely new, of course, VW having been there before with the front-wheel-drive mk3 VR6, but the new car was to offer a very different experience to the nose-heavy understeer-fest of the old V6.

Jumping from our R32 into the original, the difference is much greater than I had been expecting. On paper there’s not much between them – their bhp/ton figures differ by just two points – but the earlier car is much more organic feeling, communicating exactly what’s going on through beautifully weighted controls, the boomy V6 all the while making its considerable presence felt in the well-appointed cabin and leaving you in no doubt that you’re driving something hardcore.

The new car is much more the shy, retiring type. Seeing the two together really highlights how discreet the current R32 is, looking only a little squatter and more square-jawed than your everyday Golf. The mk4 is altogether more aggressive, with its big, bulbous arches and gaping air vents giving the impression that there’s too much car in there for the bodywork to cope with.

They’re both very complete designs, but owners jumping from old to new might miss the ‘Look at me, I’m fast!’ styling. Mind you, judging by the number of new R32s on the road, it seems that VW has judged its customers perfectly. The Q-car is very definitely in.

It’s only when you start to really push on, out on a bumpy B-road, that the newer car plays its trump card. As the speed increases, you find yourself needing to get to some pretty big figures before it starts to feel messy. Massive grip and excellent damping are what give it the advantage, but DSG also offers a big helping hand. Although we’re not fans of the automated manual, there’s no doubting that when you need to go fast from one place to another, it’s very, very effective.

Retrace your steps in the old car and you’re suddenly a lot busier with the steering wheel and nowhere near as liberal with the right pedal. Following in the wake of the new R32 leaves you in no doubt which is the most effective tool.

So both R32s are great cars. The original’s charm gets under your skin almost immediately, but its replacement is a much more complete piece of kit. Well made, comfortable, easy to live with… and its looks won’t upset the neighbours. The scariest thing, however, is the ease with which it offers up its performance. It cruises along twisty lanes leaving you totally unaware of your Gatso-bothering speed until a cursory glance at the speedo slaps you in the face with an alarmingly big number. It really does make speed very easy. It’s just that increased speed doesn’t always equate to more fun.