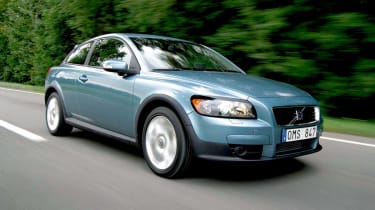 It’s a matter of perception. The Volvo C30 is an S40 saloon with fewer doors and 22cm chopped off the tail. Or it’s a Ford Focus in a Swedish suit (made in Belgium). That’s what happens when you deconstruct the evidence before you.

Alternatively, you can look at the whole instead of the sum of the parts, to see if it’s greater. Certainly there’s nothing else around that’s quite like the C30, and there’s a good chance that Volvo will gather a lot of buyers who like the idea of a compact, premium-flavoured, three-door hatchback with slightly sporty signals and which isn’t German. Or, indeed, Italian; Alfa’s 147 would be an obvious C30 rival, national temperaments notwithstanding, and the future 149 will be more obvious still.

So, why should anyone consider a C30 over an A3, a 1-series or even an Alfa? Isn’t a Volvo a bit staid and sensible, bought by people who match? True enough, goes Volvo’s thinking, so we need to get cooler, younger, more marketing-department-friendly people into our brand. They will quite likely be childless, probably single, affluent on an accelerated career path, and lead hectic urban lifestyles. And they’ll all live in Notting Hill.

There have been Volvos that have transcended the stereotypical image before. The 480, spiritual (and tragically unreliable) ancestor of the C30, was one. The 850 T5R, preferably in custard yellow with black wheels and an estate-car body, was another. The current S60R misses the mark memorably, but Volvo knows that, and a new S60 range isn’t far away. Meanwhile, the C30 looks quite enticing with its fiercer interpretation of the S40 nose, headlamps set well back from the grille, broad rear shoulders, deep, all-glass rear hatch and a glasshouse that tapers rearwards in plan view, like a less extreme version of the Volvo 3CC concept car.

Other design tweaks that hint at fun-to-driveness (bearing in mind that too many buyers never see below the surface) are the low dashboard line and the textured black plastic lower valances, wheelarches and protuberant sills. If you have the Sport version you get 18in wheels instead of 17s, plus more prominent sills and spoilers painted – like the arches – in either body colour or a contrast. One such contrast has pearlescent white body paint and metallic brown edges, much like the C30 ‘concept’ car (created long after the real thing was signed off) seen at January’s Detroit show.

Inside the C30 you’ll find four individual seats and a welcome aura of airiness. The deep rear window and the gap between the rear seats makes for easy reverse parking, and rear passengers like the good view forward that comes from setting the rear seats closer together than the front ones. It’s a pity about the hard plastics that trim the adjacent window sills, though, especially given the plush, padded nature of the cabin’s front half.

Other annoyances are the slow creep forward of the front seats on their electric motors when people want to get in the back, the uselessly small glovebox and the cheap, dated, monochrome LCD characters in the information display. The ‘floating’ centre console in which it is set does look good, though. Among the various ways of personalising your C30 is by choosing your console finish, maybe in satin off-white like the keyboard of an Apple iBook, or in aluminium etched with a surf-wave pattern.

These things are important in C30-world. More important to us, though, is how it drives. All the four-cylinder engines – 1.6 and 2-litre petrols and diesels, plus a 1.8-litre petrol – are as found in Focuses, so you know what you’re getting. More authentically Volvo are the three five-pots: a naturally aspirated 2.4 with 168bhp, a D5 turbodiesel 2.4 (177bhp) and a T5 turbocharged 2.5 petrol (217bhp). We drove these last two, both of them in ‘Geartronic’ five-speed auto guise (which is obligatory on the D5).

It’s a shame there were no manuals available for this very early drive, especially as the Geartronic doesn’t even have the paddle-shifters its PlayStation-literate target audience might expect. But the Geartronic isn’t much good at smooth, quick manual downshifts anyway, so it’s better to stay in auto and let the ample torque offered by either engine do the work.

The T5 petrol engine is almost the same as the one borrowed from Volvo by Ford for the Focus ST, lacking just 5bhp and some of the ST’s aggressive edge. It makes a typically five-cylinder smooth, harmonic hum, and even when shackled to an automatic transmission it hauls the C30 in eager fashion. Volvo says the manual version can reach 60mph in 6.2 seconds, which is pretty impressive, and even the auto needs just 6.6. The D5 is slower overall, of course, and sounds a bit gruffer, but it’s also more relaxed and a fine, economical eater of motorway miles. It needs 7.8 seconds to touch 60.

You wouldn’t expect a Volvo to handle with the focus of a sportily optimised Focus, and it doesn’t. The steering is lighter, softer, more rubbery, but the responses are still progressive and consistent, the balance pleasing. Go into a bend hard and the nose tracks accurately, resisting understeer and allowing adjustments even when well loaded up. The tail is mobile enough when you ease the power to let you feel some interaction, and were it not for the softening effect of the automatic transmission it would no doubt feel sharper.

What is missing is the slightly artificial, nose-heavy feel of the fastest Focus, which is a welcome surprise. The C30 comes across as a more complete car dynamically, helped by a firm but tidily controlled ride and a terrific driving position, but we need to try it again with a manual gearbox to decide if the C30 T5 could be truly special.