The 500 Abarth needs working for rapid progress, but that's part of its charm 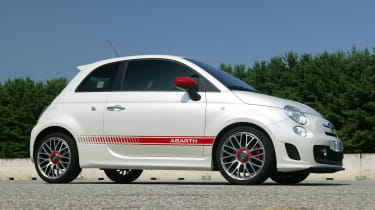 It’s undeniably the grubby end of the stick, but I’m grasping it uncomplainingly. Whilst Ollie got the thrill of turning up to a wonderfully soggy grey factory in Oxfordshire at the start of a weekend, I’m dutifully having to put up with humdrum northern Italy on a horribly warm sunny Wednesday morning.

The Fiat Group test track at Balocco always seems surprised to see a bunch of journalists turn up, rather as though the group email didn’t quite get through, and as a result there are always interesting things burbling around that probably shouldn’t be. This time it’s two Ferrari California prototypes, an Alfa 8C with added bulges, and something unusual but distinctly Maserati-like. Yet despite this, I’m actually more excited and tantalised by the prospect of two rows of 500 Abarths that are being kept covered up until after the press conference.

Luca di Meo, CEO of Abarth, attired in the sort of tapered bright red trousers that only an Italian can get away with, greets us all and proceeds to speak floridly on the Abarth brand – racing is key, authenticity is vital, Abarth has very young customers. There’s then some clever outside broadcasting to show us live pictures of a 500 Abarth going around the track. Then some lovely black and white archive footage of a gaggle of 695s racing each other (engine covers propped up, of course).

Super stuff, but it feels a bit like me telling you that the 500 Abarth has 133bhp at 5500rpm and 152lb ft at 3000rpm, before going on to explain that it’s got MacPherson struts at the front, a torsion beam at the rear and an anti-roll bar on each axle, when what you really want to know is what it’s like to drive…

The covers are off when we get outside and the little Abarths look fantastic. There are black ones, red ones, some in a sort of primer grey, and then there are the pearlescent white ones. The last of these colours, sheen sparkling in the Milanese sunlight and picked out with red logos, is undoubtedly the one to have.

Where the Mini JCW is still very much a Mini first and foremost, this 500 is definitely an Abarth and not a Fiat. Little scorpions and thunderbolts have replaced all traces of Fiat badging, and the restyling inside and out is thorough enough to make sure that it feels like a new model and not just a tuned one. The changes include a deeper spoiler at the front hiding two new intercoolers, a rear bumper complete with diffuser, a large yet restrained roof spoiler jutting some way out over the rear window and a ride height that has been lowered by 10mm. It looks fantastic.

Inside, the optional leather trim is soft, thick and beautifully stitched (although a cloth-trimmed one I tried later was good too). You sit quite high and it doesn’t feel like there’s a vast amount of room inside, but the gearstick sprouting from the dashboard falls neatly to hand and the flat-bottomed steering wheel is well sized. The big dial under the cowl is both rev-counter and speedo, the former sitting inside the latter, which is not as complicated as it sounds. There is also a dinky boost gauge grafted to the side of the binnacle, with a gearshift indicator that suggests how to be more economical under normal circumstances or tells you to shift at 6000rpm if you’ve selected ‘Sport’ via the lozenge-sized button on the dashboard. It’s worth leaving the Sport button pressed, though, as in normal mode you only get 133lb ft at 2500rpm and the steering has so much assistance it feels like sitting in a chair pretend-driving with a Frisbee.

Although a test track sounds like – and in some ways is – a great place to test a car, I’d give an awful lot to drive the 500 in the Mini’s wheel-tracks in Wales. Balocco is very smooth and this makes it tricky to get an idea of how the suspension will react other than at the absolute limit of grip. The first few laps are taken up with learning exactly which of the many interconnecting circuits you’re meant to be using, but they also reveal that the steering in Sport mode is very well weighted with a consistency that remains all the way from the straight-ahead to full lock. Soon there are lots of Abarths whizzing around willy-nilly, looking a bit like the ghosts from Pac-Man. I follow one for a while and it looks great as it squirms and wriggles on the brakes with its hazard warning lights flashing (something they do automatically if you trigger the ABS) before squealing into a left-hander, understeering slightly then bumping over the kerbing and accelerating hard, but not overly quickly, up the next straight. Through the faster right-hander at the end of the straight there’s even some attitude at the rear as the driver bottles it slightly midway through.

The cars sound good too, a healthy rasp coming from the exhaust of the 1.4 Turbo T-Jet at low revs. The circuit doesn’t actually show the little 16-valver off to its best advantage, because your natural instinct is to keep it spinning all the way to the rev-limiter, where it starts to feel like it has run out of puff, but in fact the engine is thumping most encouragingly between 2500rpm, when the turbo kicks in, and 5000rpm, when it starts to fade out, which should make it wonderfully flexible and fun on the road. And if 133bhp just isn’t enough for you, there will be an Esseesse (pronounced SS) kit that will take power to 158bhp at 5750rpm and torque to 170lb ft at 3000, as well as giving you uprated brakes, all for around £3500.

The Abarth, like the Mini, gets its own version of an electronic diff that works through the ESP. Press a button marked TTC (Torque Transfer Control) and traction out of the slower corners is noticeably improved. You can’t turn ESP off, which seems a shame at first but in reality probably isn’t a great loss because it’s very well judged, and I doubt the 500 would be a lift-off-oversteer hero even if you could make the nanny turn a blind eye.

By midday the marshalling around the site seems to be quite relaxed, probably because they’re all trying to avoid the heat by dozing in the shade. So in the name of photography Kenny P and I do a bit of exploring, which happens to take us near the special surfaces. This allows a surreptitious run over a section that looks like a large McCoy’s crisp and reveals that the Abarth is actually very compliant and will not, like the Panda 100HP, give you a headache every time you see a speedbump. I suspect the damping could do with a little more control, however, because as you push up against the Abarth’s limits on the track it occasionally bobs very slightly (particularly at the rear) instead of settling straight into a consistent lean angle. The mid-corner bumps and the generally rougher surfaces of UK roads will be interesting.

One thing that will help it cope is sticking to the standard 16in wheels. The car I drove for most of the day – the one you can see in the pictures – was on optional, and undeniably gorgeous, 17in wheels (which gives you a good idea of how big the little 500 actually is). These gave a slightly crisper turn-in and the Pirelli P Zero Neros certainly gripped a bit harder, but the 16in wheels shod with ContiPremiumContact2s gave the Abarth a more fluid feeling and made the front end more engaging as it slipped more gradually and allowed you to play with it.

The 500 Abarth is great fun. Where the Mini is enjoyable in the speed it generates and the sense that you’ve got to work hard to hang on, the Abarth is just as enjoyable for the speed it doesn’t generate and the fact that you haven’t got to work hard to feel like you’re bouncing all over the limit. It might not set any dynamic benchmarks, but I didn’t see anyone driving a 500 Abarth anything other than fearlessly flat-out all day long. Very Italian.