Exploring car weight transfer somewhere you can experience its effects a lot: in a Lotus Elise

We mentioned weight transfer in our introduction, and that the largest amount results from braking, a lesser amount from cornering and a little less still from acceleration. Rather than continue with theory which is hard to describe and harder still to understand, I will attempt to illustrate the dynamics of weight transfer by talking about how it affects specific models of car. Hopefully the application will make it easier to understand, not to mention, to describe.

I have written many times that the Elise is an admittedly entertaining, but often tricky little beast, a fact which the Lotus guys will politely admit if you ask them the right question. It’s better now than it has ever been, simply because those same guys have now spent so much time fiddling with it. The main problem is simply that the Rover (or nowadays the Toyota) engine and gearbox is hung right out at the back and this makes for a substantial rearward weight bias – exactly the same characteristic that endowed rear-engined Porsches with a reputation upon which the company is still trying to put a positive spin. In fact it’s amazing how similar an early 911 and an Elise feel from the driving seat.

You drive towards the corner, brake smoothly and after losing the required amount of speed, let the car settle before easing it into the corner. The nose responds, but not that sharply. In fact as you press on and gently squeeze on the power, you find yourself adding more lock. It’s ok though, because there’s no power steering to mask the feel of the road and the Elise especially, is extremely light, so you know exactly what’s going on because your fingers tell you. But then, the road starts to tighten. The corner is sharper than you thought and you couldn’t see the exit properly because of the line of trees. The realisation that you shouldn’t have been going that fast at this point anyway, is not exactly welcome. The car is now beginning to run wide towards the verge. Adding more lock doesn’t seem to tighten the line. You know, because you have driven one before (what I meant about knowledge preparing you for eventualities) that backing off the power is likely to give you a still bigger problem but very soon indeed you are faced with a yet more unwelcome realisation. The choice is to run on to the verge and accept you will head forwards into the ditch, or back off and hope your talent will prevent a visit to the same ditch, slightly further along and going backwards.

Inevitably, you decide to rely on your talent. Lift off the power a little, gently and as progressively as time will allow. The tail begins a lazy yaw, so instinctively, you whip the wheelrim in the opposite direction, but it has little effect. You start frantically to pile on more reverse lock but it’s too late, the opportunity has gone. The spin continues. Once the cause is lost, you remember to straighten the wheel to stop yourself flying right or left as you come out of the gyration and get firmly on the brakes, hoping you don’t hit anything in the meantime. It’s a nightmare with which Elise drivers who take their cars to the track will be familiar, and it’s much, much worse in the wet - I can remember being unable to pull an Elise ahead of a well-driven Peugeot 206 at a soaking wet Anglesey. But, why does it happen ?

But why did it happen? The process begins because a much larger proportion of the car’s weight is resting on the rear tyres, so as you ease into the corner, the fronts have less to press them to the road. The rears meanwhile, have plenty thanks to the engine’s weight, so the front end starts to nose wide. When you finally lift off because it’s all going wrong, a proportion of the total is effectively transferred to the front end, so grip at the front increases but - because the total remains the same - weight pressing on the rear tyres must be less and grip there is reduced. The balance with which you initially felt comfortable is disturbed and hops the other side of a very fine line. Much the same things can happen with a front driven car but the big difference in the Elise/Porsche 911 case, is the position of the engine and gearbox. The front wheels have effectively received a slightly larger share of the total but there’s still a much larger proportion remaining towards the rear which had already begun to yaw through the turn but which is now really on the move because suddenly there is less grip to restrain it. Like the proverbial dumb-bell, that mass is also a long way aft of the car’s centre – or the point about which the weight is swinging – and this is what makes it less willing to stop when you whack on the first dose of opposite lock. You can prove the whole thing for yourself with a domestic broom. 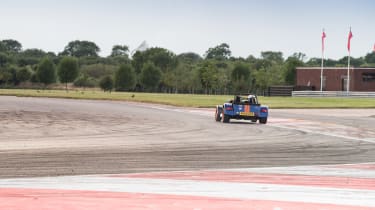 Hold the shaft close to the bristly end and move it about. It’s easy and you can almost twirl it in any direction with wrist power alone. Now hold the shaft progressively further along its length – further away from the bristles - and try the same. Well before you get to the end, your wrist probably won’t have the strength to arrest exactly the same weight of bristles once you have them swinging, which - as I’m sure you’re aware - is a function of the polar moment of inertia. It is also incidentally why tromping the accelerator when you are already in trouble doesn’t necessarily make things worse as you might expect. The tail squats, weight is transferred back to the rears and you can sometimes get the balance back and stop the spin. The trouble is, when you think you’re about to crash, it’s always harder to give it a great bootful of power...

Weight a long way from the middle though, is a design problem almost impossible to overcome satisfactorily, and Lotus would much rather have used an in-line engine and gearbox for the Elise, as they did with the wonderful old Esprit and for similar reasons. This would have kept the major masses closer to the centre of the car and reduced the potential to swing. Rather like effective government of the country, purely economic reasons meant it wasn’t the preferred option and Lotus had to use a proprietary front-driven engine/transmission package. So, apart from progressively reducing the size of the front tyres to reduce the bite (a technique also used by Mercedes when the A-Class first fell over), the Lotus designers have deliberately introduced bump steer at both ends. This they will admit, doesn’t cure the probem – any more than do the various attempts Porsche have tried over the years – but it helps to slow down the incipient phase and gives the driver a chance to recover the situation before it goes out of control. 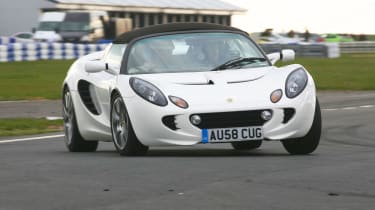 Bump steer is not part of weight transfer, but having mentioned the Elise, it is worth a moment’s discussion. Lotus have arranged the Elise’s geometry such that on say, a right hand bend, the left front wheel steers slightly more to the left as the car rolls. This effectively tugs the car’s nose away from the turn and makes the steering less effective, they hope just at the critical point when the weight transfer combined with cornering effort is dipping the nose to one side. Better known as the Elise twitch... Meanwhile at the back end, they use bump steer geometry to turn the laden wheel slightly in towards the turn. Because this effect is taking place aft of the point about which the car is yawing (somewhere about the middle of the car), a rear wheel pointing in tries to turn the car away from the arc it is transcribing and makes the back less willing to follow the front into a spin.

The rate at which the whole process unfolds is also influenced by the dampers – the technology and application of which could easily fill several volumes – but the inescapable downside of a geometric arrangement which relies on suspension deflection is that the ride height from which it starts, is critical – something I also touched upon last time. When people lower their Elises, unless they check all the results of their modification and almost more important, know what they might have to do to optimise it, they will almost certainly be introducing characteristics which they didn’t want. Could of course be the other way, but without the specific knowledge it’s hard to know which of your fiddling did what. I have driven two standard Elises on the same day at the same circuit and their handling was so completely different they could have been different models. None of it is irreversible, but if you suspect a problem – even with a standard car - then an investigation followed by a proper setup by someone who really does know their stuff is never a bad idea.