Car weight distribution: understanding its effects when driving on track 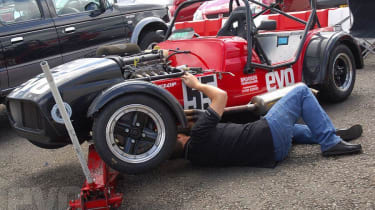 Everybody knows that front-wheel drive cars tend to understeer (push on rather than turn) whereas rear-wheel drive cars tend to oversteer (turn more than the driver intended). Both statements can be true, but they are too generalised. A front-wheel drive car will usually understeer when you pour on the power and overload the tyres, but they are also capable under certain conditions, of delivering the nastiest and snappiest kind of oversteer; less so these days because manufacturers have spent lots of money keeping wheels pointing where they should be, or in many cases pointing inwards under certain conditions to prevent exactly what I’m tallking about.

Similarly, rear-drive cars may tend to oversteer when you get on the power, but on the other hand they may not. Because the layout separates the steering and driving wheels – so it doesn’t give the front tyres two jobs to do at the same time – a pair of tyres of similar size to those fitted to a front-drive car of similar power, will have spare capacity. So the same amount of power may well not overcome the tyre’s grip and slew the tail wide. The front end may then be less effective by comparison and the car will understeer. Drive that same car in the wet though and the tail will almost certainly slide, because the tyre’s ability to grip is reduced and the available power can overload it much more easily.

Tyres play a hugely important role of course, but let us just consider the weight distribution issue a little further. A car weighs so much overall, and that is distributed – let’s assume for the sake of argument, equally - between front and rear. When the driver gets on the brakes, the total remains the same, but the effective – or dynamic – distribution, alters. Weight is effectively shifted to the front wheels but since the total remains the same, the rear effectively weighs less. Since there is less to press the rear tyres to the road, they will slide more easily, but this is not the same thing as saying a lighter car would therefore slide more easily at both ends... The point is that the balance of the car has changed and it is the change that makes the difference in the car’s behaviour. There is also the point that the weight has been lifted from the rear wheels but they are still receiving a similar amount of braking effort (forget ABS just for the moment). This makes them more likely to lock, which is akin to yanking on the handbrake. 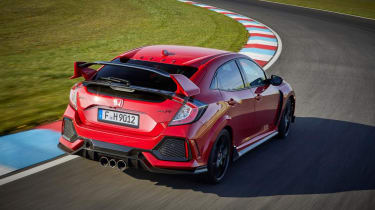 Now we get to the tyres. It is hugely important to understand that a tyre can only generate optimum lateral (or cornering) grip, if it is turning at the same speed as the road is passing beneath (it loses almost everything if it is locked or spinning) and, only if it has a slip angle. This is not the same thing as a steering angle but you need a steering angle to generate a slip angle (which is the difference between the angle described by the tyre’s tread and the direction the wheel). In the case of the front wheels this obviously happens when you turn the wheel, at the rear, the rear the car has to develop a yaw angle. It does that automatically, but until it does, the tyre won’t generate any lateral grip. And just as there has to be an angle of slip in order for the tyre to generate grip, too much angle and it will give up. That is why winding the wheel too far in a desperate attempt to get the car round the turn, usually makes everything worse. There is also the question of camber thrust, which we will deal when we get to rubberware.|The tyre therefore has its own optimum operating conditions where it will offer the best grip, but as must be obvious, it has limits even when it’s not locked, spinning or skewed beyond its preferred slip angle. If you load it beyond its limits by simply giving it too much to do (like trying to take a corner too fast) it won’t be able to cope and the car will run wide at one end or the other, or both.

So, the main points so far are these; the weight distribution throughout the car will certainly have an effect on how the car handles (and remember that adding weight to the tyre will improve its grip, up to a point), but anything else which disturbs the tyre’s ability to grip will also have an effect. One is fixed by engineering and design, the other tends to be a product of driver input. But before we leave this brief look at the theory and take a look at some specific examples, we should just mention suspension geometry – a topic which could and does, fill a whole book on its own.

The weight of the car acts via the suspension’s geometry, it must do if you think about it, because that is the only route to the tyre contact patch. We then have a theoretical point in space known as the roll centre, which as its name implies is the point about which the car rolls and it represents the interaction of the various suspension components and the leverages they exert over each other. The tricky part is that this geometry will vary as all the various hinge points move and since the movement is different side to side and front to back (and in at least two different axes) the point about which the car rolls moves as well. It goes up and down, and side to side. Stick a knitting needle in a cardboard box, try and roll the box round the needle. Look at what happens to the attitude of the box, dependent on exactly where the needle is poked through, then consider that the four corners of the box are roughly where the wheels are.