Driver fitness: how to train mentally and physically to drive fast on track

How do you hone your mind and body to shave valuable time off your track day lap? 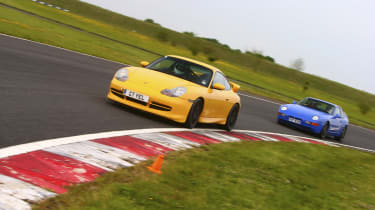 The race track realm is all about the pursuit of limits. How late can I brake? Can I carry more speed though that corner? Will the rear stick through the chicane if I stay flat? All are questions you’re posing of your car and yourself, asking how far you can push it, how much performance you can extract before falling victim to the laws of physics and adding unwanted hundredths and tenths to your lap times.

Of course your car’s performance is crucial to driving quickly on track, as is the state and quality of the relevant consumables that take the punishment as you pedal round lap after lap. Stickier tyres, bigger brakes and more power can help you get the better of the stopwatch. Modifications and upgrades, though, shouldn't be exclusively applied to your car - your body and mind can be honed for extra speed, too!

Driver fitness, both physical and mental, plays an increasingly important role in professional motorsport but it can also help the committed amateur driver get the most out of their track time and their car. It'll cost a lot less than a turbo kit or engine rebuild too. 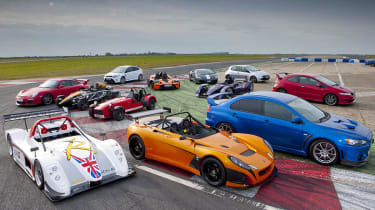 A portly pro racing driver is seldom seen, in fact these days this speed hungry breed are nothing less than fitness freaks. Despite the seated nature of the sport, what it asks of the human body when splicing the streets of Monaco at 5G, or bouncing over the brutal Dakar desert floors is staggering. Being in tip-top shape is only half the battle when it comes to racing at the highest level too. Focusing the mind into a state of high speed zen is the route to the consistency of performance every driver strives for. Mental steel is the foundation of sustained speed.

Below we explore the mental and physical aspects of high performance driving, and look at how you can improve your track day lap time by taking tips from today's leading competitors and motorsport experts.

The car and body are often presented as metaphors for each other. An elderly family member has likely pestered, 'you wouldn't drive your car without petrol, so why leave the house without breakfast?' Just as you’d treat your car to super-unleaded and the best tyres your budget will allow, your physical condition should get a high level of attention. That means eating right.

Director of Boomerang Pro Fitness, John Camilleri works closely with several professional racing drivers in the World Endurance Championship and has some bad news. 'Ditch the bacon buttie! Porridge with honey or dried fruit would be a beneficial breakfast for sustained energy.' This is consistent with dietary research across  all sport, a healthier diet of slow-energy-release carbohydrates will deliver peak energy levels. Heavy, infrequent meals are best avoided, hence from breakfast onwards, 'meals should be light, but consumed quite regularly for maintaining energy levels', according to Camilleri.

One-time personal trainer to triple world champion Lewis Hamilton, Clayton Green, now Manager of the Human Performance Programme at McLaren said the drivers' exercise and diet combinations are informed by an ideal body composition, 'we want drivers to stay below 10% body fat but if they can get to 8% that is really good'.

'Irrespective of what car you are driving, there are three fitness attributes that are worth considering. Cardiovascular fitness is important for efficient oxygen utilisation. Core strength is also important because it can help with maintaining control while experiencing G-forces, both laterally and under braking. Finally, you are likely to reduce your risk of injury if you take the time to work on your flexibility. This is an area of physical fitness that benefits all drivers', claims Camilleri.

A large proportion of  efforts should be dedicated to the aforementioned cardiovascular system. Results will manifest themslesves in a lower heart rate, boosting the stamina and muscular endurance that prevent fatigue tiring your body as the laps rack up, ultimately increasing the likelihood of posting faster laps. Universal cardiovascular training methods include: swimming, running and cycling, often the most popular on the Formula 1 grid.

Core strength training combats the vast compression forces that drivers experience under the acceleration, deceleration and cornering loads. Generating longitudinal and lateral G increases the effective mass of your body under load, and in serious track cars -think Porsche GT3- it can double! Supporting the weight of two heads through three violent direction changes of Maggots, becketts and Chapel demonstrates why the bulk of strength training is concentrated around the neck and synergising pectoral muscles.

John Camilleri works closely with several professional racing drivers in the World Endurance Championship. 'Racing is much more strenuous than trackday driving, but from a preparation point of view many of the same principles apply,’ he says. ‘If you are well rested, your energy levels will be maximised and your cognitive processing will run at an optimal level. You will be able to concentrate for longer and react quicker on track'. 'It’s important to identify areas on the track where you can relax', such as the straight folowing the Bank Complex (turn 4) at Bedford Autodrome. Camilleri notes it’s important to “take in a couple of deep breaths and relax” when the opportunity arises.

Channeling the overwhelming volume of stimuli flowing the drivers way into immediate and subsequent actions over the course of a lap is both draining and challenging. Sports psychologist, Saul Miller, likened track driving to a high-speed board game, 'It’s like playing chess at 150mph'. Plotting effective moves to topple your opponent in chess is measured, slow and thought out. This pragmatic and progressive thought process needs to be replicated on track, but compressed and constantly repeated at each corner to maximize entry and exit speeds in search of the fastest line.

The ability to react without hesitation and delay is imperative. F1 drivers often employ the batak reaction board to sharpen concentration and reaction times. You aim to hit as many randomly-illuminated lights on the board in an allotted time. Breathing techniques are also employed, to establish a state of calm behind the wheel.

A common technique called upon by plenty of track-goers is visualisation. Formualting a mental map of the circuit before getting out on track builds a clear image not only of what you're up against but of how you’ll manage your inputs, from braking to steering to shifting. It can be a valuable asset when tackling complicated corners, think the double apexed Pif Paf (turn 5) at Rockingham. Revising your visualisations after each session highlights areas for potential improvement where you can readjust your visualizations to reproduce on track.