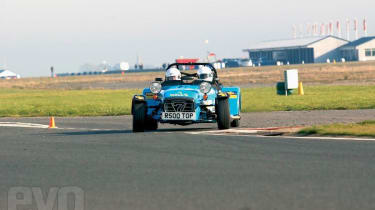 The need for Ackerman is simple; the arc described by the steered wheel on the outside of the car, is of a larger radius than that on the inside. If the wheels stayed exactly parallel when they were turned, one of them would scrub because it was being forced to transcribe the arc of the other – or at least they would compete to make that happen. The way round it is a nicely simple piece of geometry which involves angling the steering arms either in towards the disc - or away from it - depending on whether the rack is in front of the axle or behind. The angle (nominally about 90 degrees) between the steering arm and the track rod changes as the wheel steers and this moves the wheel more or less depending on which side of 90 degrees it is and since one side mirrors the other you will get the required difference depending which way you steer. This is a necessarily superficial assessment, but if you draw a little diagram, you get the idea and the good thing about Ackerman is that, unlike toe out or toe in, it doesn’t have any effect until the wheels are steered.

The whole picture changes though, when you start going fast, because the back yaws which changes all the angles at the front end, and the front tyres assume lesser slip angles (because the back has yawed) which does the same again. In general it is better to make sure the Ackerman is as it was designed and hasn’t been altered by a kerb or the like, but, when you are desperate – either because the regulations forbid the preferred route which is to attend to handling undesirables by other geometric means, or where you are racing a front driven hatch – it is sometimes worth altering the angle of the arms so that the inner wheel turns more tightly and tugs the car towards the apex. It can make all the difference. Stock Hatch racers will know exactly what I mean.

The theory of suspension geometry is massively complicated, mainly because anything that moves affects several things and those parameters which change have an effect on several more and so on.

The main problem with front-drive is that the front tyres are doing two jobs and power always affects their lateral grip. Wheelspin is worse still because the tyres lose almost all their ability to drive in any direction which, in theory should make loose or muddy surfaces an even bigger challenge. I say in theory, because in this particular piece of practice it didn’t quite work out like that. 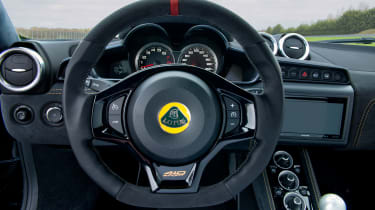 When I tried it for myself, I could see why. It was clear that the first – and most important - principle was to use the surplus entry speed and redistribute it, but it is not an exact science. You can’t know beforehand whether the speed is one, two or five mph too much or the same amount too little and that moment of inactivity – the freeze at the wheel – is when things aren’t quite as you wanted, a reflective instant in order to work out what’s going on and what you might need to do about it. At all other times you must be on the power and if the tail swings too much when you first squeeze the brake pedal then you have the option to add a little more urge to pull it straight. If you add too much – or the grip is less at that point in the turn - the front tyres will spin too fast, lose grip and will be less able to pull the car through the corner. You may then have to squeeze the brake pedal just a touch more – or freeze for a little longer... The main intent is to seek traction for the front wheels and to do that they need to be pointing as straight as possible. Don’t give them two jobs...

I will be the first to admit I’m not a rally driver, and having charged at the corner and loosened the tail with the left foot I couldn’t suppress the instinct which made my hands turn the other way and catch it. That meant I’d have to loosen it again to turn the corner, by which time I’d lost a lot of the necessary momentum. Without thinking, I would straighten the car out with opposite lock.  I can see why rally drivers brought up on a previous style of machinery sometimes find it difficult to adapt because they can’t – indeed must not – rely on their instincts. For similar reasons, I will also confess to getting my left foot mixed up with clutch and brake on a couple of occasions and it was then clear too that the gearbox has tougher dogs than those in the Touring cars; they hang on to their ratio and you can’t shift down easily without the clutch.

In theory, a rear-driven car should have the advantage because the power and steering are separated, but on the loose, as the rears begin to spin, the tail begins to slide and there is only so far you can yaw before you have to back off. The front-drive driver can at least keep a foot in it for as long as the rear can be persuaded to do the turning. I’m not sure I’d have subscribed to the view a few years back but having watched a young man at the top of his game in the latest of the breed – and then tried it for myself - I can see that while the theory also still says front-drive is a bigger compromise, in this particular practice, the driver has more options to deal with it.

I have often found top level front-drive circuit cars rather baffling on brief acquaintance because I couldn’t see an immediate route to access their capabilities. This though was different. That’s not to say you will soon be at a champion’s pace but what looked impenetrable from the passenger seat was a great deal less so from the other side because the car offered exactly what was promised – stability with responsiveness. Added to which it was much more fun and a great deal more exciting than I’d expected.