Find out the noise limits governing track days in the UK. 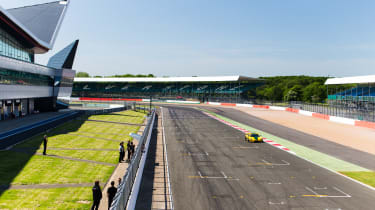 Track days are a blast. The chance to drive harder than you ever could on the road, and getting the adrenalin pumping epitomises the thrill of driving. But there’s a downside: noise. Those few seconds when you have your car decibel-tested can be the most nerve-wracking of the entire day – fail and it’s likely you won’t be allowed near the track at all.

Why are there noise limits?

How is it that race tracks, of all places, have come to have noise limits? There are four main parties involved, book-ended by the track day attendees and the people who live nearby. In between lie the track itself and the local council. The council has a responsibility to its residents, but also needs to be mindful of the benefits the circuit brings to the local economy, so most lay down guidelines that stipulate not only noise limits but how often and at what times the track can be used. If the track breaks these rules – which are often monitored remotely by the local authority – it can face being shut down. It’s a balancing act for all concerned.

On arrival to your track day (normally) prior to the driver briefing a circuit official will carry out a static test. A sound meter is positioned half a metre from the exhaust at a 45-degree angle, with the car of held at three-quarters of maximum revs. Exceeding the prescribed dB ceiling will result in a fail. The same goes for the drive-by reading (measured at a distance of 20 metres) when you’re out on track, not all tracks have drive-by testing, though. 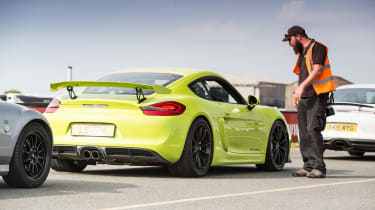 Are they the same at each track?

Some circuits must adhere to stricter regulations than others with local residents pushing for quieter noise limits or the track to be closed down altogether. Trying to safeguard their existence, many circuits are being constructed with noise containment in mind, but such methods only do so much.

Bedford Autodrome, evo’s home circuit, has some of the toughest regulations in the country – a 101 dB static limit and a 87.5 dB drive-by reading – and this is despite spending a fortune building noise defences. ‘Well over half of our development costs go into fighting noise,’ chief instructor Phil Ellis told us. Bedford is not alone.

But it’s the Croft situation that has sent shockwaves through the industry. ‘We were served with an injunction last year,’ circuit manager Tracey Morley told us. ‘A local resident has been against us for over 13 years and had tried various ways of closing us down, finally bringing a private noise nuisance case.’ Croft had to cancel all track days and very nearly went bankrupt before agreeing to restrictive new regulations. The new quiet drive-by limit is just 70 dB averaged over an hour. 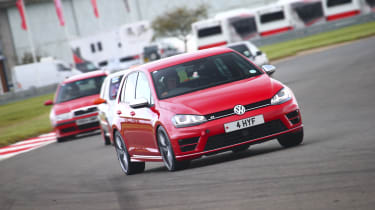 Some circuits can help if your car fails the decibel tests. For instance, at Castle Combe a firm called Merlin Motorsport can fit a temporary additional silencer to your car’s exhaust. ‘A foot-long pipe out the back may not be pretty,’ explained Rodney Gooch, sales and marketing director of Castle Combe, ‘but it’ll make the difference between taking part and going home bitterly disappointed.’

However, the easiest way to ensure your car passes the noise test is to keep the stock exhaust system. ‘If we have trouble, it’s almost always something with a sports exhaust,’ said Phil Ellis. ‘With the exception of one or two Ferraris there are very, very few standard road cars that break the sound limits.’

So is it likely that noise regulations will get even tighter? ‘We don’t believe so,’ said Ellis, and most people we spoke to seemed to agree that a successful compromise has been reached. ‘Ultimately local residents are our neighbours,’ Ellis continued. ‘We don’t want to upset them, but neither do we want to compromise our business and the people who come here to enjoy driving their cars.’ 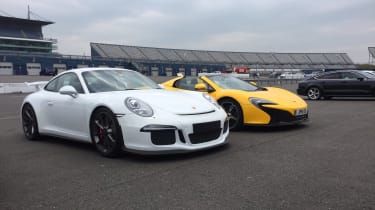 Take a look below at the restrictions governing noise limits at UK tracks.