Cause and effect: specific examples of how to lower your track lap times

A look at some specific examples, like a Peugeot at Silverstone, and the implications of trying too hard to make it go fast at Stowe Corner 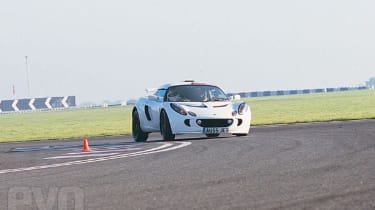 The intent of these articles was to discuss some of the basics which might help a driver improve their technique. I hadn’t intended to get into quite so much theory, but when I initially sat down to write the hands and feet part, I realised that it was impossible to say categorically, 'if you do this, that will happen.' It might, but then depending on that, this might also happen... and that depends on the layout of the car... or on how a car with that particular layout has been adjusted....  or this, or that, depending on whatever. I thought that a bit of delving might help to explain why, when a Porsche 911’s primary characteristic is understeer, it tends to crash backwards, or why when front-drive cars are supposed to understeer, some of the modern breed feel extremely sharp at the nose. A greater understanding I hoped might allow a driver to work out for themselves why something is happening in their particular case.

We should also remind ourselves of that most basic of basics which is that irrespective of layout, cars would really rather go straight on than turn. This is a simple matter of physics in that having imparted energy to a mass and made it travel in one direction, it will tend to carry on. If you head into a corner fast enough, any car will leave the road in a more or less straight line – think puck on ice, bar of soap on wet lino. The track driver’s job then, is to persuade the mass to turn, but as close to escape velocity as possible. The problem is that while tyres, steering and suspension mechanisms are the means by which the driver exerts that persuasion, these are things which can also introduce additional problems which are not always obvious. Added to which, the exact way these means are used and the way they are integrated, complicates matters still further. Given that the car has already been built (or modified) the best combination on the day (or least bad, depending on how you look at it) is up to the driver. How well the car turns will depend on how well the driver has used the brakes, the steering and the energy of the car’s motion. This is the technique of driving.

Let’s look at some more examples. Take a modern, typically well-sorted front-driven performance hatch, say, a Ford Focus or VW Golf (or any one of the others) and tackle Stowe Corner on Silverstone’s Grand Prix circuit. This (unless they have changed it since I was last there) is at the end of the hugely long Hangar Straight and is a medium-speed right-hand bend which turns through more than 90 degrees and which will need moderate braking from three figure speeds and maybe a couple of downshifts. Build up to it and brake smoothly and gently, looking for the apex. Down one gear, then into third and ease the wheel right, aiming for an apex just out of sight below the slight crest. Squeeze on the power. The car obligingly heads for the clipping point and round you go in a neat constant-radius parabola, the corner floating away to the right as the road opens out while you run smoothly along the kerb on the left. So far so good. Your instructor is nodding his approval. 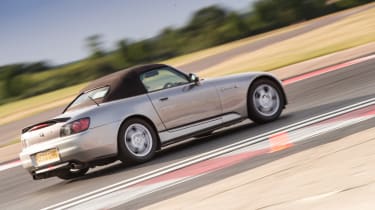 Not exactly race-winning pace though, so next lap you resolve to brake later. It is obvious to you that maintaining that three-figure speed for a moment longer must shorten the lap time. Wait until you think you should be treading that middle pedal, count to one, and push. Down goes the nose. You find yourself hurrying to get past the syncros and get the clutch back up and the driveline solid before the turn-in. You just make it in time but up comes the nose as you release the brakes and you find yourself going for the turn-in, rather than easing the wheel. Now, the front end seems less willing to point in and you have to apply some more lock as you add power. The apex passes half a car’s width to the right and as the corner unfolds, you realise that you are too far to the left. Instinctively you are adding more lock and it isn’t having much effect, so you’ll have to back off. Where is that last lap’s graceful sweep ?

Where indeed. It could of course be that the first effort was at the car’s absolute limit and nobody could have assembled the ingredients of braking, steering and power in better order. I do know from experience that a lap involving the kind of neat and tidy cornering efforts that have your instructor nodding, is often quicker than the sort where you really try.

To return to our Focus at Silverstone where we’ll assume there was still some time to be found. In search of that, we had braked later for Stowe which had effectively transferred weight to the front of the car, but then because we hadn’t learnt to heel and toe and we’d fumbled for the gears, then had to wait while the roadspeed hooked up the engine’s revs, we’d lost the flow. That was a trend which worsened when we came off the brakes, because the nose came up just as we turned the wheel, which effectively meant there was less to press the front end to the ground. The left front tyre didn’t bite the road and the front end washed out as we trod the accelerator. We added more lock and the steering angle increased at the same time as the application of power shifted weight to the back of the car. The apex was no longer a prospect and we had to back off because we were running out of road. At exactly that point, our earlier effort had seen us accelerating hard round a constant radius, gathering speed for the run down The Vale.

So we pull into the pits and have a conversation with our instructor who suggests we learn to heel and toe but meanwhile, he’ll just give a quick demonstration in the last few minutes of the session. Down towards Stowe until, surely there’s not enough space left to brake. Swiftly, but firmly, his boot moves from accelerator to brake. You notice that he doesn’t stamp on the pedal though, it’s more like the footprint of a dancer or someone who doesn’t want their tracks to be heard. No mistaking the effort mind you, as the brakes grumble with the strain while at the same time you see the foot roll to the right and just touch the accelerator. Up spins the revs as he lazily slots the gearlever back, across and forward from fifth to third and you think, yes, the difference between the ratios is maybe 2,000 revs. If you sat in the car park, how much boot do you need to lift the engine that far? The real point though is the fact he could do it all at such a lazy rate. He had created space in the process which he could use at his own pace.

You are then aware that the force on your body has subtly altered. Your head was leaning forward under the force of braking but now it’s being pulled to the left. The car’s nose has stayed down and the driver has eased the wheel just enough to load up the suspension and replace the weight shift of braking with that from the turn-in. The bonnet hasn’t come lurching up because he has subtly blended the two operations. It follows too that the weight shifted by braking has also smoothly transferred to the laden front wheel. So, does that mean the tyre is about to give up under the strain and start to push wide... It might, but for the fact that the smooth transition from brake to turn has also lessened the weight on the rear end. Remember the theory which described how the weight stays the same but is effectively shifted about by the dynamics of what you are doing. So, the left rear tyre has less to push it to the ground and begins to loosen its grip on the road. The car takes up a gentle angle of yaw.

If the driver did nothing, this yaw angle would increase and develop into the kind of scruffy tail-out photographic opportunity favoured by young road testers. Since this is a modern car though, it won’t try too hard to turn the moment into a visit to the gravel beds – the manufacturer will have sorted the geometry and the bushes in the rear suspension to keep the angles from going critical – but our driver is meanwhile keen to capitalise on what he has started. He allows just enough of the loosening at the rear to help point the car towards the apex, then he will smoothly bring in the power. The weight will shift towards the rear and tighten the tyre’s grip, but the car is by then past the apex and the steering wheel is almost straight. The front tyres can drive rather than turn, the right foot is firmly planted and you are driving hard down The Vale...

It has been a completely integrated process, almost lazy with very little work done at the wheelrim. You felt no jerk or lurch, just a subtle shift in the direction of forces tugging at your body. The timing was the thing, and it was that which allowed the economy of effort. You resolve to practice heeling and toeing and to use that to create some space in your cornering technique. You realise that trying harder doesn’t make you faster...