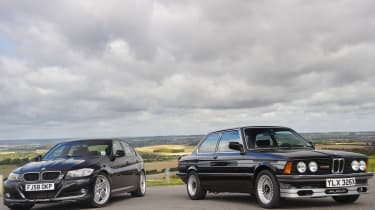 This is something I’ve been itching to do since I collected our D3 back in January. Alun Parry may be the head of press and PR at Suzuki, but he’s also an Alpina devotee and the owner of a pristine 1982 B6 2.8. I, meanwhile, have always been a fan of the E21 3-series (on which the B6 is based) and I figured that a meeting of the two Buchloe machines would provide the perfect excuse for me to slide behind the wheel of Alun’s pride and joy.

There’s also some science to the plan, though. I want to discover if there’s still any traceable DNA between the pair, or whether 27 years has obliterated any meaningful connection. The B6 is from an era when Alpina was still shoehorning large engines into the smaller chassis in the BMW range, and here they dropped in a tuned 2.8-litre straight-six that was more commonly found in the 5-, 6- and 7-series. This one has had its ignition system remapped by Alpina’s engineers to produce 200bhp, which should be pretty lively in a car weighing 1275kg, especially when the E21 is famed for the looseness of its tail.

As I drop into the driver’s chair (re-trimmed from the final roll of this original Alpina cloth) it strikes me just how good a restoration job Alun has done on his car. Perhaps I shouldn’t be surprised, though – he started out as a BMW apprentice, so he worked on these cars when they were new. Over the years he’s owned eight other Alpinas plus various BMWs, and out of all of those this is the keeper.

The gearlever to my right (all B6s were left-hookers) works its way around the gate as sweetly as the one in the D3, but the ratios are intergalactic. At first I thought this was to serve as a primitive form of traction control, but when I discover the B6 also has a huge 98-litre fuel tank, I realise it’s more to ensure that the whole of Germany could be covered in one bite at proper Autobahn speeds. Much like the D3.

At the top of the rev range there’s a real kick and a soundtrack you don’t get with modern sound-deadening. Everything feels more intimate too. The steering is sweet once you get past the initial play and the brakes are far more responsive than you’d expect from such an old stager.

It’s a lovely thing, this B6, and I can see why Alun has kept it all these years (he bought it in 1995 for £3000) and spent so much time working on it. But he’s as impressed by my Alpina as I am by his, and he reckons that in a year or two he’ll get a D3. High praise indeed, and surely all the proof you need that the original Alpina spirit still flows through the company’s current cars.