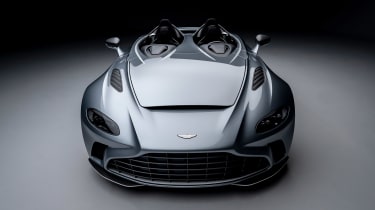 Aston Martin has revealed its open-to-the-elements V12 Speedster for the first time after teasing the new model’s existence at the beginning of the year. Conceived a little over 12 months ago by Q by Aston Martin, the company says the Speedster is ‘a truly visceral driver’s car that draws inspiration from both the brand’s rich racing history and aeronautical design’.

While the V12 Speedster may give a nod to Aston’s past successes – the Le Mans-winning DBR1 and DB3S are both namechecked along with the CC100 Speedster Concept – it’s bang up to date in its architecture, utilising the bonded aluminium VH-II structure found in the DB and Vantage ranges. Power comes from Aston’s V12, and while finalised outputs have yet to be confirmed, Aston is currently estimating 700bhp and 555lb ft of torque, 15bhp and a surprising 109lb ft down on the DBS Superleggera.

The front mid-mounted V12 is mated to an eight-speed ZF automatic transmission driving the rear wheels through a mechanical limited-slip differential. Claimed performance figures are suitably brisk, knocking off the 0 to 62mph increment in just 3.5sec on its way to a limited top speed of 186mph, but still not as rapid as the DBS Superleggera which gets to 62mph 0.1sec quicker and has a top speed of 211mph. Given the Speedster’s lack of windscreen, 186mph should prove sufficient though.

To ensure the Speedster offers the ‘visceral’ driving experience that Aston Martin promises, the Speedster utilises a double wishbone front suspension and a multi-link rear end with coil springs and adaptive dampers with the familiar Sport, Sport+ and Track settings. Braking is taken care of by carbon-ceramic discs – 410mm at the front, 360mm on the rear. To make the most of the Speedster’s open cockpit, Aston has designed a bespoke stainless steel exhaust for the Speedster to coax a more characterful soundtrack from the V12.

While the V12 Speedster features Aston’s familiar building blocks, Aston says it has its own unique platform and backs this up with a bespoke body constructed almost entirely from carbonfibre. Its typical Speedster shape has no roof or screen and couples this with the obligatory double hump layout aft of the driver and passenger, while there’s a central spine that separates the two occupants. Up front the unique headlights and large Aston grille combine with a bonnet nostril vent – an iconic Aston design cue from yesteryear – to give the Speedster a unique look, but one that’s instantly recognisable as an Aston Martin. 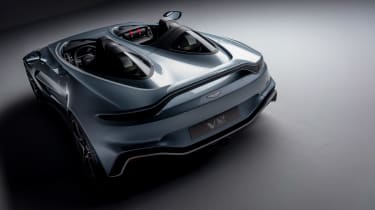 There’s a broad-shouldered look to the Speedster, while at the back the low rear end has been given a lighter touch with the centre-exit bespoke exhaust that emanates from the diffuser surface hinting at its performance potential. Aston Martin says inspiration for the car’s design comes not just from its back catalogue but from fighter aircraft with its Skyfall Silver colour scheme being inspired by the F/A-18 fighter jet. Thus it has contrasting satin black on the exhaust tips, vent grilles and vanes.

Inside, the colour scheme is continued with satin dark chrome, machined aluminium, black leather, black technical textile, black carpets and red Aston Martin scripted door pulls. For the interior, Q by Aston Martin has utilised a mix of traditional and modern materials, with exposed carbon, hand-crafted Saddle leather and 3D-printed rubber. Instead of a glove box there’s a removable leather bag, while additional storage space can be found under the rear humps. 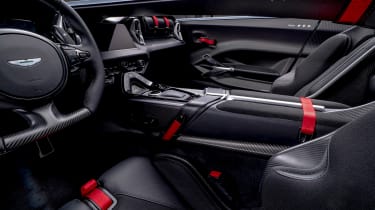 Aston Martin is keen to focus on the Speedster’s raw, emotional appeal, with chief engineer Matt Becker commenting: ‘For raw driving thrills the V12 Speedster is unparalleled, the fully open element of the car adding a new dimension to the experience. It engages on every level, delivering a precise, involving driving experience, with agility and poise backed by abundant power from Aston Martin’s twin-turbo 5.2-litre V12. Driving doesn’t get any purer than this.’

Aston Martin will hand-build just 88 V12 Speedsters, with the order books open now and the first deliveries expected during the first quarter of 2021. Its pricing is yet to be confirmed, but it’s sure to undercut McLaren’s Elva and Ferrari’s Monza SP2 by a significant margin.