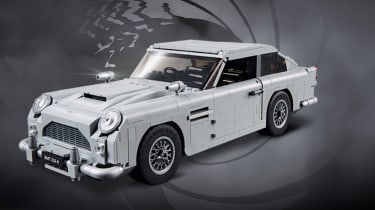 Lego has uncovered an Aston Martin DB5 based on the car driven by James Bond in Goldfinger. Available from 18 July the model, which costs £129.99, features the weapons arsenal and gadgets fitted to the car in the film.

Measuring 10cm high, 34cm long and 12cm wide, the model is a 1:8 scale of the real car and made up of 1290 pieces. The complexity of the build process has seen Lego brand the kit 16-plus.

To ensure authenticity, the car receives the same Q treatment as the iconic car that starred in the film back in 1964. To that end, there’s the radar tracker and deployable machine guns to locate and neutralise villains, while the bullet-proof screen on the rear deck, revolving number plates and wheel-mounted tyre scythes are there to fend them off.

Along with the radar tracker, the interior is kitted-out with the hidden telephone and all-important (operational) ejector seat. Just like the movie car, the model is finished in silver birch and rides on wire wheels.

Lift the front-hinged bonnet and the DB5 reveals a Lego recreation of the 4-litre straight-six engine, which produced 282bhp in 1964; enough to send the Bond car from 0 to 60mph in around eight seconds and on to a 142mph top speed.

This Aston Martin DB5 model follows on from other Lego recreations, including the orange Porsche 911 GT3 RS that featured a working PDK gearbox, and the 3600-piece Bugatti Chiron.