There may be SUVs and supercars aplenty on the Aston radar, but it’s a drop-top Vantage that’s next on the list 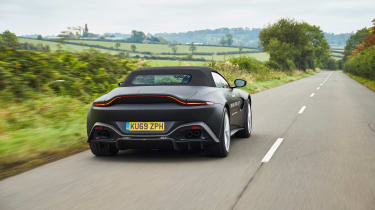 Aston Martin has released pictures of the next Aston Martin Vantage Roadster before its release next spring. The new Roadster will be based on the current Vantage coupe, and share much of its underpinnings, powertrain and interior, just with a little more exposure to the outside world.

Replacing the coupe’s hard-top is a small folding fabric roof that slips behind the seats. Rather than sitting under a hard tonneau as in the last Vantage Roadster, the simplified arrangement uses the front section of the roof as a cover when stowed, in a similar way to a Mazda MX-5 or Porsche Boxster.

As a result, the coupe’s long sloping roofline has been replaced with a more traditional three-box silhouette when the Roadster’s roof is up, looking somewhat akin to a Jaguar F-type Roadster in profile. The flicked tail and its framing rear lights do remain, though, keeping the Roaster just as distinctive on the road at night as the coupe.

Aston Martin has not yet confirmed any subsequent technical changes. However, the underlying bonded aluminium structure will likely require some strengthening along the sills to maintain structural integrity, therein adding weight to the overall package. 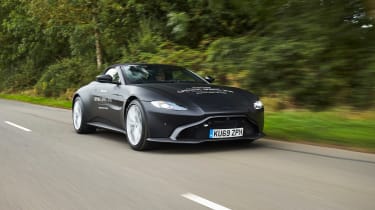 The coupe’s AMG-sourced twin-turbo V8 will also remain the sole engine choice (for the time being) and will direct its outputs through a standard eight-speed ZF automatic transmission mounted on the rear axle.

The new Roadster will join the limited-run AMR in Aston’s Vantage range, that latter car featuring a raft of subtle technical updates alongside standard-fit carbon-ceramic brakes and a seven-speed manual transmission. Both of those elements will soon be available to order on standard models too, which should include the new Roadster when it arrives next spring. 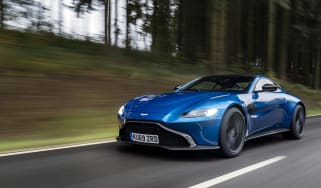