Through the 1990s, Aston’s flagship was this twin-supercharged heavyweight 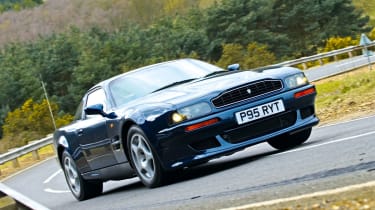 The Virage Vantage was the valedictory blast for old-school Aston, a glorious, evolving celebration of bulk versus brute force. Developed from the slightly underwhelming Virage coupe, which had replaced the classic V8 in 1989, the new Vantage’s pumped-up bodywork and no-nonsense attitude made it a real hero car to a whole generation of British sports car fans.

In its original 1993 form, its quad-cam, 32-valve, 5.3-litre V8, aided by two superchargers, heaved out 550bhp and 550lb ft of torque. Unsurprisingly, it would become known as the V550. It could do 186mph and hit 60mph from rest in 4.5sec, proving that, although it weighed the best part of two tons, a big engine would always get the upper hand – in a straight line at least.

Just to make absolutely sure, Aston uprated the engine to 600bhp and 600lb ft in 1998 (yes, the V600), elevating the claimed top speed to 202mph and cutting the 0-60mph time to 3.9sec. Seldom had anything so heavy moved quite so quickly. Even more surprising, however, was the urgency with which the Vantage could be hustled through bends. Sure, the huge tyres screamed for mercy, but the solution was usually to give the throttle a big old prod to induce a fluid, smoky drift that was far more satisfying than it was painful. When it came to chassis balance, the Aston was easily the equal of Ferrari’s 456.

Forty Le Mans-badged cars were made in 1999 (604bhp, stiffer suspension, upgraded interior, Le Mans-winning DBR-1 aping cosmetics) to send the Vantage on its way and close a remarkable chapter in the Aston story.

It was replaced in 2000 by the all-new Vanquish model, which ushered in the start of a new era for the marque; we would never see the like of the brutish but rather wonderful Vantage again.