GMR has produced an aftermarket supercharger kit for the Aston Martin Vantage V8, giving it more power than the V12 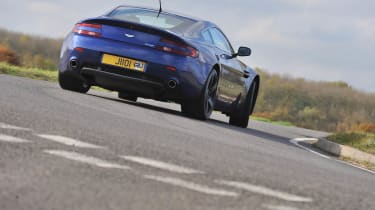 An aftermarket supercharged version of the 4.3-litre Aston Martin Vantage V8, using an Eaton blower and a water injection system to boost power output to 583bhp, accompanied by 441lb ft of torque.

We’ve already driven an earlier version of the car, which was being marketed by styling specialist Paramount Performance, but that left us distinctly underwhelmed thanks to some major fuelling issues. Now the entire project has been taken on by GMR Design, the company behind the original supercharger installation, and we’re assured that all of the earlier problems have been fixed with a new ‘piggyback’ ECU.

The final price for the conversion has yet to be confirmed, but GMR Design promises it won’t cost more than £15,000. With the prices of early V8s on the slide, that means it should be possible to create a Vantage that can out-gun the V12 for well under £50K

The installation is effectively ‘back to front’, with the supercharger mounted on the back of the engine, with power transferred to it from a take-off pulley at the front of the engine via a secondary shaft. This allows the standard induction system to be kept, and means the engine still looks near standard.

The really clever bit is the fitment of GMR's 'Geyser' water injection system, which squirts in small doses of water before the blower itself, cooling both the intake charge and the blower itself. The upshot is that the engine is able to develop its prodigious output while operating at a maximum of 0.4 BAR (6.5 PSI) of boost.

The good news is that the problems we noticed with the earlier Paramount car have entirely gone. The GMR-equipped Vantage drives like a considerably brawnier version of the standard Vantage, but drivability is never an issue.

The subtlety of the supercharger’s power delivery means it rarely feels as if it’s using forced induction to deliver its numbers, with a solid slug of urge throughout the rev range. Unlike the standard V8, there’s no need to rev it to deliver strong performance – the broad powerband dramatically reducing the number of gearshifts necessary to make quick progress.

But there’s no doubting that the supercharger lifts the standard Vantage’s performance into another league. GMR hasn’t figured the car yet, but on first impressions it feels at least as quick as the V12 Vantage, which manages the 0-60mph blast in just 4.1 seconds. The company’s demonstrator sticks with a manual gearbox, but the system can be bolted just as well to cars fitted with the Sportshift automated single-clutch transmission.

This is just a power kit – other changes will be down to owners. GMR recommends tougher brakepads at the very least, and the test car also came with the firmer ‘Sport pack’ suspension, with which it worked well.

The test car had a slight elasticity in its throttle response. It wasn’t anything like turbo lag, responses was near-instantaneous, rather it was a sensation of power continuing to swell beyond the initial request. It didn’t get in the way of the driving experience, and was in keeping with car’s newly-forced induction, but GMR suspects it might have been caused by a slight timing fault, now reportedly fixed.

Despite the V12-baiting performance, the GMR kit is hardly a rival to the bigger engined car - anyone lucky enough to be in the position to afford a V12 is unlikely to be cross-shopping an aftermarket kit for an earlier car. The GMR pack is most likely to appeal to existing V8 owners who want to unlock extra performance without losing the character of their cars. On that basis it looks like decent value considering the improvement it offers.

The kit will also fit the bigger 4.7-litre V8, boosting outputs to a claimed 600bhp and 500lb ft of torque.

The 5.3 litre tank for the water injection system is good for at least 500 miles between fills. If it runs out of water then the blower is taken offline to protect it from overheating, returning the car to a standard 380bhp.