Armada of new e-tron models will join the Audi range, but combustion engines, and natural gas, will play a part 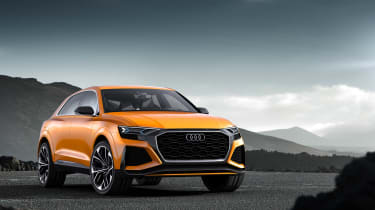 Audi has announced it will replace five core product lines by 2020, as well as introducing three new electric vehicles across its product lineup in the next three years.

The Ingolstadt-based brand has laid out its product plans for the years ahead, with Audi chairman Rupert Stadler adding that two new SUVs, the Q8 and Q4, will soon join the Audi range.

Audi will go on an electric vehicle offensive over the next few years, with three electric vehicles due by 2020 and plans for at least one fully or partially electric car per year thereafter, most based on existing product lines. These will carry the e-tron branding, as currently used on the Audi A3 Sportback e-tron (which shares its plug-in hybrid drivetrain with the VW Golf GTE) and the Q7 e-tron.

At a powertrain technical presentation in Munich, Audi's head of spark ignition powertrains and transmissions, Dr Franz Bäumer, said that a third of Audi's vehicles by 2025 will be electrified in some way, whether these are full battery-electric powertrains, or plug-in hybrids like the two existing e-tron models.

As that figure suggests, the company is far from ruling out combustion engines entirely, with Dr Bäumer describing them as "unbeatable for years to come" in their ability to combine performance, range and efficiency.

Audi's "g-tron" technology will likely give combustion engines a longer life within the maker's range, allowing them to fill up with sustainably-produced natural gas. Audi currently oversees a process that guarantees g-tron vehicles have a low carbon footprint, ensuring it produces enough gas (generated from biogas using electricity from renewable energy) to cover the total usage of the g-tron fleet. 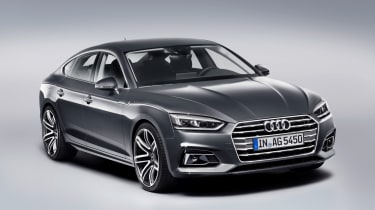 Bäumer admits, however, that "mobility will have to be emission-free" at some stage, which puts the ball back in electric power's court. The upcoming new Audi A8 will be one of the first beneficiaries, featuring some kind of hybridisation across its range.

At its lowest level this will involve mild hybrid technology, which recuperates power under deceleration or during a cruise which is then fed into the car's 48-volt electrical system. The engine is started (and stopped) using a water-cooled belt-driven starter generator, and the system allows engine-off coasting for up to 45 seconds at a time. The hefty starter allows the engine to be fired up instantly when the throttle pedal is touched, and a forward-facing camera allows the engine to restart itself in traffic - when traffic in front begins to move, for instance.

These features have already been previewed in the concept version of the upcoming Q8, which also uses the starter-alternator to drive the car at low speeds. The concept also used the electric compressor technology seen in the Audi SQ7, a car already using Audi's 48v system.

And the R8? Don't worry too much about it just yet. At the recent Shanghai auto show, Stephan Winkelmann told evo that electric power and downsizing won't feature for the forseeable future.

The car is relatively low-volume by Audi standards, and its drivers don't cover the same distances as those of more mass-produced models, so Winkelmann sees no need (environmental or otherwise) to trade the characteristics of the current V10 - one of the great modern performance car engines - for something less theatrical. Phew...