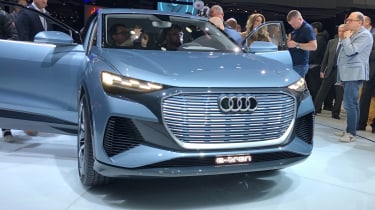 As the Volkswagen Group’s all-electric MEB platform edges ever nearer to mass production, so more close-to-production concepts keep arriving, previewing the variety of applications it will soon underpin. This Q4 e-tron concept will be the first Audi riding on the platform, and will sit below the more expensive e-tron and e-tron GT in Audi’s incoming electric model range.

As its name implies, the Audi Q4 e-tron dimensionally sits somewhere between the existing Q3 and Q5. In a move consistent with other MEB-based models from the VW group, the Q4’s cabin has been moved forward relative to the front wheels to maximise on interior space, and better take advantage of the packaging advantages associated without the requirement to integrate an internal combustion engine.

Despite the relatively small dimensions, the Q4 still has impressive power and range capabilities, with a total system power of 302bhp from two electric motors, one powering each axle. Acceleration to 62mph takes a respectable 6.3sec, top speed is limited to just 112mph. The battery pack is an 82kWh unit that straddles the two axles below the main passenger compartment, and enables the Q4 e-tron to travel up to 280 miles on the latest WLTP cycles. 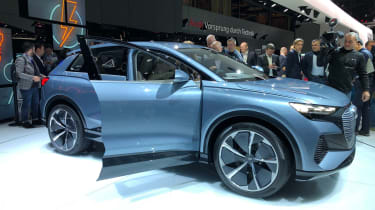 To help differentiate this BEV model from its internally-combusted relatives, the Q4 shares the slightly softer, more approachable surfacing applique with the e-tron GT. Audi’s chief designer, Marc Leicht, has the unenviable task of both maintaining parity across the Audi brand, as well as distinction between different model streams within the one line-up. So, like the e-tron GT, the Q4’s bodywork has fewer hard lines and a greater emphasis on curvature. Essential Audi elements like the single-frame grille and slim, four-sided rectangular headlights of course remain, but it’s clear there’s an intention to distance the Q4 from more overtly aggressive siblings like the Q8.

The interior also takes obvious elements from the GT, with a high-mounted infotainment screen integrated into a gloss black strake running across the dash. This is a different approach to the dual-screen set up found elsewhere in the Audi range.

The Q4 is to be Audi’s fifth BEV model when production commences at the end of 2020, following the current e-tron SUV, a ‘fastback’ four-door coupe derivative of the e-tron, the aforementioned GT (which will be also be revealed in full-production form at the end of 2020) and Chinese-market only Q2 e-tron.

What is clear is the Volkswagen Group’s intention to offer as wide a variety of battery electric platforms throughout its vast brand catchment as it currently does with its internal combustion range. Consider the Q4’s MEB platform to be the electrified version of VW’s widespread MQB. One look at all of the near-production MEB concepts from all of Volkswagen’s mainstream brands on display at this year’s Geneva motor show perhaps proves this hypothesis.