Entry-level R8 is rear-drive and a bit lighter, but ultimately proves no sportier or more engaging than the quattro V10 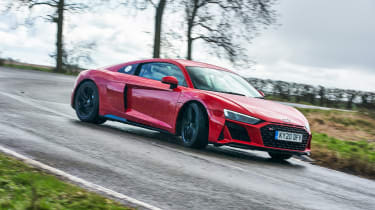 The R8 V10 RWD is the regular production version of last year’s limited-edition rear-drive R8, the RWS (rear-wheel-drive series). Compared with the quattro model it’s 65kg lighter, thanks mostly to the deletion of drive to the front wheels: the centre diff, propshaft, front differential and driveshafts.

The suggestion is that this simpler, lighter and slightly less powerful R8 V10 will be more throttle adjustable and more rewarding. In short, more of a driver’s R8. It costs a useful chunk less and looks much like the regular model, the individual identifiers being its body-colour side blades and gloss black, ten-spoke, 19-inch alloys. 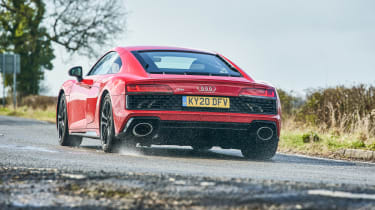 The 5.2-litre V10 has been the only engine available in the R8 for a few years now and in the RWD delivers 533bhp, as per last year’s RWS. This means that it’s 29bhp less potent than the regular quattro version and well short of the range-topping 611bhp V10 Performance version. There’s a slightly smaller shortfall in torque. Like all R8s, it is coupled with the seven-speed dual-clutch, S-tronic gearbox.

Although the RWD is 29bhp down on the quattro version it is also 65kg lighter, resulting in almost the same power-to-weight ratio, but it’s slower from a standing start because those deleted mechanicals help deliver the traction to deploy all of the V10’s performance off the line. The RWD is still rapid of course, taking just 3.7sec to get to 62mph (0.3sec longer), and once you’re rolling there should be very little between the two models. Flat out the RWD gets to 199mph, while the AWD’s extra horsepower gives it the bragging rights because it pushes it to 201mph. Emissions-wise, there’s little in it, the rear-driver offering a fractionally better WLTP combined mpg figure of 22.2 (21.6) with 289g/km (298). 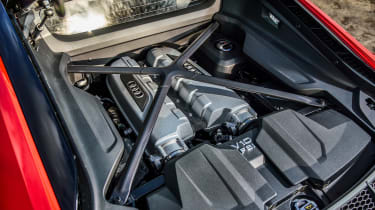 When you start with a mid-engined car with a naturally aspirated, 5.2-litre lump in the back and then remove the drivetrain to the front wheels, that’s only going to concentrate more of the weight over the rear axle. In the RWD it’s now 40:60 front/rear, so as you’d expect, the RWD comes with its own ‘sports’ suspension set-up. This is a fixed damper arrangement and there isn’t the option to specify adaptive damping. There is a limited-slip differential and a selectable ‘drift’ mode. Braking is by steel discs all round and the only gearbox is the seven-speed S-tronic, a dual-clutch design.

In many ways, the RWD feels just like its all-wheel-drive counterpart. The V10 fires up with a super-smooth, warbly beat, and for a near-200mph, mid-engined supercar, it’s terrifically refined. The gearbox is responsive and shifts seamlessly, in town the ride is surprisingly supple and quiet, and the 5.2-litre V10 is muted.

It’s almost shocking then, the first time you pin the throttle and feel the heavy punch of the V10 and hear it howl enthusiastically all the way to the 8000rpm red line. You don’t really miss the 29bhp it gives away to the quattro model but you do miss some of its dynamic poise. Grip is excellent, but the chassis of the RWD doesn’t feel quite as composed in all situations; at speed you sense that the rear is heavier and the nose a little lighter, the tail settling weightily into corners, the front feeling like it just needs a moment over mid-corner humps. 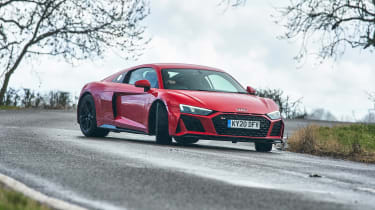 In the dry, traction off, you can tease the tail out a little, the throttle linear and predictable. It’s a bit trickier in the wet thanks to the crisp breakaway and momentum. There is a ‘drift’ mode, but we didn’t venture on track and so didn’t appraise it. It feels like adaptive dampers would close the gap to the quattro version, though the all-wheel-drive model would always have the advantage in the wet, the front wheels helping pull it out of a corner. I can’t help but think that the now long-discontinued V8-engined R8 would have been a better candidate for rear-wheel drive. It had just two cylinders less but was lighter in the right place and appreciably more agile. It also came with an exquisite manual gearbox.

At a little short of £115k, the R8 RWD coupe is a useful £15k less expensive than the quattro version. There’s also a RWD Spyder version for about £9k more. The RWD gives you most of the thrills and sensations of the AWD, though ultimately it’s not as capable, so you are getting what you pay for. Being low-slung and mid-engined, it feels more intrinsically exotic than cars such as the Aston Martin Vantage (£120k). The solid throttle response of the high-revving V10 is a rare treat these days too, so while the McLaren 540C (£128k) is a sharper tool dynamically, it’s less aurally compelling. 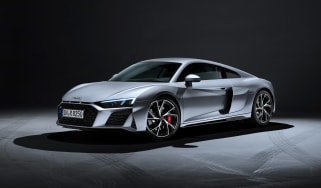