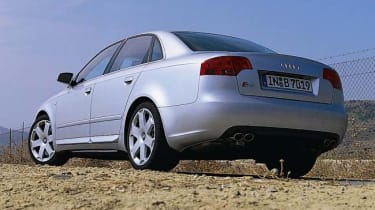 Audi seems to be playing the long game. Each successive model brings a bit more attitude and driver appeal to add to its traditional strengths of fantastic build quality and beautifully crafted interiors. It's just a pity it can't up the pace and really give BMW something to think about.

Latest development in this strung-out dynamic evolution is the new A4. It's not entirely new but is much more than a mere facelift to bring it into line with the bold new Audi look. The S4 remains the most beguiling of the range thanks to that stonking V8 slung out front, but it's the new engines and suspension revisions further down the range that are the real surprise.

Lessons learned from the old S4 have prompted significant tweaks to the rest of the range. The Servotronic variable power-assisted steering from the performance flagship is adopted across the range and the S4's hollow section aluminium rear trapezoidal links, front track-rods and wheel hubs have also filtered down, as well as revised damper and spring settings taken from the A6.

It's quite a range now, too. There are two new petrol engines; a 2-litre direct injection turbocharged 'four' with 200bhp, and a 3.2 litre V6 producing an impressive 255bhp. They join the naturally-aspirated 102bhp 1.6-litre, 130bhp 2-litre and 163bhp 1.8-litre turbocharged engines. On the compression ignition front there's a new 3-litre V6 turbodiesel with twin intercoolers, 204bhp and a mighty 332lb ft from as little as 1400rpm. It's kept company by the existing 1.9-litre and 2-litre four-cylinder and 2.5-litre V6 turbodiesels. That's ten engine options including the 4.2-litre V8-engined S4, so Audi quite rightly feels there's now an A4 for everybody. But is there one for us?

Let's start with the S4, surely the guaranteed hit of the range for enthusiasts. We tried a manual saloon and it stormed the tortuous Targa Florio course in Sicily, shrugging off wicked camber changes and terrifyingly bumpy braking areas with a casual nonchalance. It carries its weight pretty well, too, but the penalty for determined body control is an overly fussy ride and a curiously wooden feel to the chassis. It's certainly more agile and responsive than an RS6 and that V8 was quick to serve up big numbers between the hundreds of tightening corners, but an M3 would have been heaven on this course. Harder work, maybe a fraction slower in the hands of all but the most skillful, but infinitely more rewarding, exciting and intimately involving.

The S4 is a wonderful car to be in and covers ground at an astounding rate but it's still not true drivers' fare. To be fair, Audi hasn't made any great claims about improvements to the S4, instead concentrating on the new-engined A4s. Most important is the 200bhp 2-litre turbo four-pot we tried recently in the A3 Sportback (evo 072). The A4 2.0T FSI costs £22,175. It should be a big seller and seems to tread a good compromise between outright performance and value for money. After a spirited drive we were impressed by the new engine's instant punch and smooth revvy nature but even more so by the chassis tweaks.

Jump straight from the quattro S4 into the front-drive 2.0T and you'll wonder if the benefits of all-wheel drive are worth the weight penalty. It feels instantly lighter and so much more precise when switching between rapid-fire corners. The steering is a shade light for my liking and there's a lack of really detailed feel, but the driving position and superb steering wheel really aid you when you're pushing on.

Ultimately it can't match the S4's huge grip nor its iron-fisted damping. Yet the way it reins in understeer, letting you feel the rear of the car getting involved and exploiting the chassis' ability to flick between direction changes, is more fun than the less frisky S4. And the two-stage stability system (one jab to dilute the traction control, a three-second prod to cut it completely) is very effective at making the most of the four-cylinder turbocharged motor's trust.

The aggressive new face of the A4 hints at Audi's current confidence and although the S4 still can't match the M3, the more mainstream models have closed the gap on the 3-series. But the ageing BMW retains the edge thanks to its superior steering feel, chassis balance, and silken sixes. The A4 still needs finishing then, but the winds of change are blowing through Ingolstadt. BMW beware.