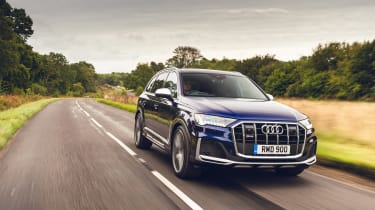 There is a lot of impressive technology in the SQ7, but the engine is one of the most remarkable things about the entire car. At its core it’s a 3956cc, 90-degree, diesel V8 with double overhead cams and four valves per cylinder. It also has three compressors – one electric supercharger, and then two turbochargers placed within the two cylinder banks.

Let’s start with the headline-grabbing electric supercharger. This supplements the additional twin-turbo set-up by forcing the air from the intercooler into the inlet. The electric compressor works when the engine is at low revs and the conventional turbos aren’t spinning fast enough. At around 1400rpm the other turbos start to work, and eventually the electric compressor is bypassed so as not to interrupt faster moving inlet gases. The electric supercharger means the engine can develop maximum torque of 664lb ft from 1000rpm and helps eradicate turbo lag at low revs.

> Click here to read our review of the Audi RS6

The SQ7’s two other compressors, the turbochargers, work sequentially to create a progressive power delivery. As the revs increase, the first turbo starts to boost along side the electric compressor before it is bypassed. Then, at higher revs, the first turbo is joined by the second to help make more power.

This is nothing new, but the way the second turbo is activated is far more interesting. Each of the two exhaust ports per cylinder feed separate turbochargers; one port sends gases to the first turbo while the other port sends gases to the second turbo. This is achieved by keeping the valve to the second port closed at low revs, essentially making the engine a three-valve-per-cylinder single-turbo engine until the revs are high enough. 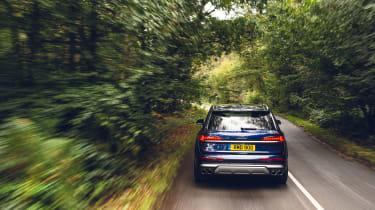 Audi has used its valve lift system (AVS) to achieve this. In most applications, AVS switches between two cam profiles to help increase performance at high revs while maintaining drivability at lower rpm. However, in the SQ7’s engine one of these cam profiles keeps the valve completely closed, then, when the second profile engages, the valve begins to operate and exhaust gases flood to the second turbocharger.

Both of the turbos are nestled within the two banks of cylinders, making the SQ7’s diesel a hot-V engine. This is essential to be able to feed two turbos with individual exhaust ports, but this configuration also helps heat up the catalytic converters rapidly, making them able to work sooner. The hot-V set-up also means that the entire engine is more compact, allowing it to be used in multiple different chassis.

A triplet of compressors, all working in stages, might sound incredibly complicated, but in reality it’s very effective. The electric compressor really does create an immediate throttle response at low revs. However, it really is only the very first time you stand on the accelerator that it feels truly impressive because the instant response is just so incredibly easy to get used to. As the turbos overlap to keep the inlet pressures high, there is a slight surge at around 2800rpm, but that’s the only slight deviation away from linear power delivery.

> Click here to read our review of the Porsche Cayenne

The SQ7’s power is sent through an eight-speed automatic. Yes, it’s the same ZF unit that’s in, well, everything. But, why not, when the shifts are as smooth and effective as they are in the SQ7? It isn’t at its quickest in this big Audi, but with 664lb ft to deal with that can be forgiven