Everything you need to know about buying a used Bentley Continental GT. 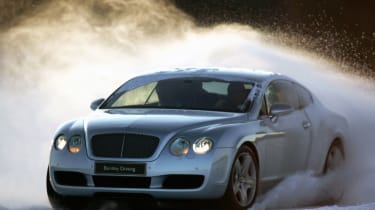 Steve Drewitt runs Silver Lady Services in Bournemouth, which specialises in Bentleys and Rolls-Royces from pre-war to the present. He is our guide here.

‘If it’s well looked after, the W12 is a dependable unit,’ says Drewitt, ‘with no cam belts to worry about. That’s a good thing, because the engine bay is very cramped so the engine has to come out for major work. The turbos tend not to give any problems and the spark plugs are replaced only every four years. There’s quite a lot of dismantling needed to get to them. Most of the problems we see in the early cars are caused by bad connections in the wiring loom. We’ve also had to replace a few radiators, which means taking the front bumper off.’

‘The ZF six-speed auto is very reliable in itself, and the few problems we’ve seen are again usually caused by switches and ECU connections.’

‘The variable dampers give no trouble, but the front drop links for the anti-roll bar often wear, making a knocking noise. They’re about £50 each to replace. The brake discs are big, to cope with the car’s weight, but spirited driving can go through the front ones quite quickly. Worn-out brakes are a good sign of a neglected car. The tyre-pressure sensors are lifed at five years, after which the built-in battery runs out. New ones are £142 each, and by the time they’re fitted, which includes removing and refitting the tyres and balancing the wheels, you could be up to £900 plus VAT.’

Drewitt says the interior is very good quality and wears well, but there’s more plastic in it than you might expect. It’s important to check that everything works as it should, because there are a lot of motors and electronics in there and two batteries to power them: a main one, and a smaller back-up one able to start the car in an emergency. You activate it by turning the key anti-clockwise and holding it there for 5-10sec. The body is robust, with huge torsional stiffness, and these cars are too young to have any corrosion problems.

Supplied by Silver Lady Services. Tyre prices from blackcircles.com. All prices include VAT at 20 per cent

The least you’ll pay for a 2006 car is £40K, while the last of the pre-facelift cars are still nudging £100K if the mileage is very low, but the specification must be right. The Speed version commands a premium, as does a car with the Mulliner pack, which includes 20in wheels, machined and turned aluminium fittings, quilted leather and more.

GTCs seem to be worth around the same as an equivalent age and mileage GT after a few years, despite their higher cost new, while Flying Spur saloons are worth rather less. Top of the tree is the Supersports. You’ll pay more from an official Bentley dealer, but the extendable warranty remains at factory standards.Useful contacts