A great grand tourer but definitely no sports car 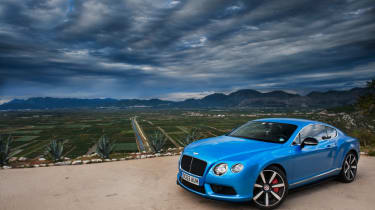 While the Bentley Continental GT might be a little bit long in the tooth, it still carves out its own succesful, if slightly unusual, niche. Delivering an exciting blend of performance and luxury, the GT is definitely more of a grand tourer than a sports car.

Definitely more grand tourer than sports car, a spirited drive in a ‘Conti’ is more about managing its 2320kg kerb weight than anything else. While vast carbon ceramic brakes and a set of properly potent engines do a lot to keep things thrilling (and safe), this is a car that never feels anything less than cumbersome, particularly in W12 form.

Where the Continental GT is more successful is in acting like a compact version of a bigger luxury saloon. Air suspension, a hand made interior and an emphasis on comfort rather than dynamics, mean the ‘Conti’ lives up nicely to its GT name.

A bit like the Aston Martin DB9, no amount of updates can mask the fact that the Continental GT’s underpinnings are starting to show their age. Still, its distinctly hand-built feel combined with a genuinely exciting powertrain in the form of the V8 S, see the Bentley remain a very tempting package.

What the Continental GT is now also up against is the new tech-filled Aston Martin DB11. Leveraging Mercedes' own interior tech, the new Aston is leaps and bounds ahead of the Bentley in terms of the gadgetry on offer. It also looks fairly specatacular, although we're still yet to drive it. For those interested, you can see the DB11 in detail in our video preview here.

The W12 Speed might be the most powerful model in the Continental range but it is far from the pick of the bunch. The lighter V8 S boasts better fuel economy, improved handling and is cheaper to boot.

'A Bentley engineer once objected to me calling the Continental GT heavy, instead claiming it to be ‘solid’. Whichever adjective you use it’s pretty clear that the GT is a chunky car and that severely limits its sporting appeal. ‘Continental GT’ could hardly be a more apt moniker - for crossing continents and everyday use the Bentley ticks all the right boxes and it’s therefore little wonder the GT has been such a success. Although the W12 is the range-topper our preference is actually for the V8 models. They still offer effortless performance, but with a touch more of the response and delicacy that we look for in a high performance car. Dan Prosser, Road Test editor, evo'