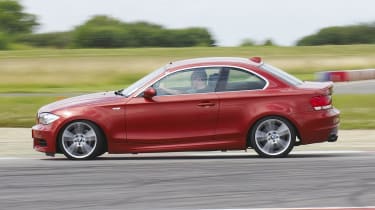 This won’t be your regular long-term test. The BMW 135i you see here is in pristine condition, but it’s not brand new; it arrived at the office with 6354 miles on the clock and the plan is that over the next few months it will be transformed before your very eyes. Well, I say transformed, but this being evo the re-work we have planned for it is visually quite subtle, some of the more significant modifications being entirely hidden.

Using our skill and judgement we are going to pick what we consider to be the best bits from the ‘BMW Performance’ range of after-market parts with the objective of seeing if we can get our 135i close to the thrills and West Circuit lap time of the mighty M3. The range of parts offered covers most aspects of the 1-series and 3-series, from wheels and suspension, through brakes and engine upgrades, to body styling and race-style seats. First, though, we had to work out where the 135i could take improvement.

Very soon you notice that there’s an underlying ‘bobble’ to the 135’s ride, a sort of double-take whenever a wheel hits a bump. It robs the car of poise, fine control and accuracy, and it’s darned annoying after a short while. I strongly suspect the run-flat tyres are the cause. As luck would have it, just a few days after the 135i arrived there was an evo trackday at the Bedford Autodrome, and there we discovered a couple more things. The first is that the 135i is chuffing quick. Its twin-turbo 3-litre straight-six proved potent enough to run neck-and-neck down the long back straight of the South West Circuit with E46 M3s. There’s little doubt it’s got the full 302bhp and thumping 295lb ft of torque.

The double-take wheel control was less of an issue on the smooth asphalt of the Autodrome, of course, and the little BMW was pretty effective through the corners, thus stringing together a strong lap. However, there’s a fraction too much understeer built into the balance; try to make good use of that strong, low-rev torque by getting on the throttle early and the nose will push wide. Also, although the brakes look magnificent (six-pot Brembo calipers up front – the M3 only gets swinging calipers!), there was a bit of fade after a few fast laps.

The real test came a couple of weeks later, though, when we set a lap time on the West Circuit. Back in April, for our ‘How fast?’ feature in issue 131, we nailed a great lap in a twin-clutch M3 coupe – a 1:25.9. With over 100bhp less, smaller tyres and a bit less weight (95kg – not quite as much as you might expect, eh?), I was expecting somewhere around the 1:30 mark from the 135i. Yet despite throttle-back-a-bit understeer through some of the quick turns, on its second flying lap it clocked a 1:28.7. Good work. Now let’s see if we can modify it, whittle that time down and create a more enjoyable drivers’ car in the process.