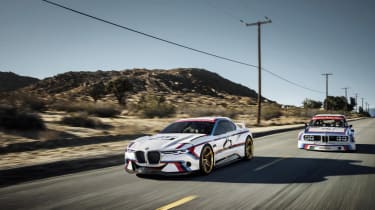 The original E9-generation BMW 3.0 CSL is revered in BMW circles not just for its styling, but its success on the world’s circuits following its introduction in 1972.

Among the best known is the wide-arched IMSA car that took victory at the 12 Hours of Sebring in 1975 – the same year BMW founded BMW of North America. The team took further victories that season, winning the manufacturers’ championship in the process.

To celebrate forty years of both BMW’s official American sales channel and that first victory stateside, BMW has presented its latest take on the CSL Hommage concept unveiled earlier this year at the Concorso d’Eleganza Villa d’Este.

While the original concept was displayed in a striking yellow, echoing one of the road-going colour schemes of the period, the latest concept – dubbed the 3.0 CSL Hommage R – wears white paintwork and BMW Motorsport stripes, echoing that IMSA car of 1975.

Outwardly similar to the yellow Hommage concept, the car’s transformation is mainly graphical – and all the better for it. Some details have changed though, including the deep kidney grille, now incorporating mesh rather than vertical elements. The wheels, silver on the original concept, are now matt gold with black inlays. 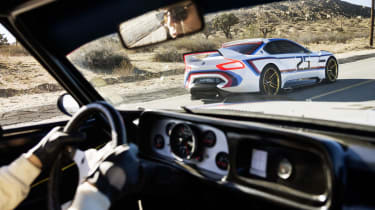 It’s inside where the biggest changes have occurred. Already a nod to the CSL road car, a wood-like panel encircles the dashboard, but here displays the track layout and other data on its surface.

The rest of the interior has been designed from the driver outward – and it starts with the driver him- or herself.  A Puma-designed race suit actually features illuminated piping to illustrate the progress of information from the car to the driver’s special visor. This visor acts as a head-up display, with data shown in the periphery of the driver’s vision.

The seats might be beautifully trimmed, but the shells are carbonfibre and, according to BMW, ‘reflect the anatomy of the seated driver’. Carbonfibre surrounds the driver too, in the form of a built-in roll cage integrated into the car’s structure.

Ahead of the driver, the steering wheel meanwhile is concept-car minimalist, albeit speckled with buttons for various car functions. It’s also shadowed by a pair of large paddles, which operate the automated transmission.

Adrian van Hooydonk, Senior Vice President of BMW Group Design, says the car ‘represents the heartbeat of BMW… we’re aiming to show how much closer the driver and car can grow in the future.’

It’s set to go on display at this weekend’s Pebble Beach Concours d’Elegance near Monterey, California. BMW is also presenting its latest take on the M4 at Pebble Beach, the 460bhp M4 GTS concept.