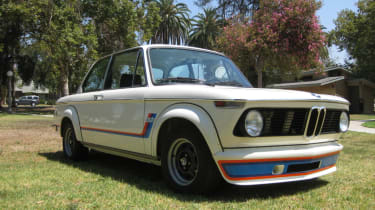 There’s a very particular kind of turbocharged car that makes the breed so appealing. Not the prod, wait, grip tightly, holyhellthat’sfast of an F40 (though that’s entertaining in its own way), nor the relentless onslaught of power and occasionally pious naming (‘EcoBoost’) of modern cars.

It’s the turbocharged car whose punch builds into a crescendo of power, the sort you’d have got from a late-90s turbodiesel if they’d had the inclination to continue their boosted enthusiasm to the red line.

You can buy that turbocharged experience in the shape of a BMW 2002 Turbo, like the example coming up for auction in Monterey later this month with Russo and Steele.

This particular car hails from 1974, a year after the 2002 Turbo’s introduction, and has made its way to the United States at some point having been delivered in Verona in March of 1974.

Much more recently – 2014, to be precise – its existing owner treated it to a full ‘rotisserie’ restoration at the hands of two classic BMW specialists in California.

That’s apparent in the condition of the car’s body – still in the original Chamonix white paint work, as confirmed in an email linked to the sale by BMW’s official archives department. It should also be apparent, for whoever bids the highest, in the engine, thanks to a full drivetrain rebuild. 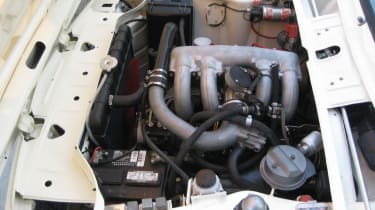 The key figures when new were 170bhp at 5800rpm and 180lb ft of torque, numbers which today rank it somewhere below the average hot supermini. But then hot superminis don’t traditionally send their power to the rear wheels, and few are quite as light as the 1060kg Turbo.

Officially, that combination results in a healthy 7.3-second 0-60mph time and 130mph top speed, which should feel fast enough with slim windscreen pillars and expansive glass to peer through.

No estimate is listed, but the rarity of 2002 Turbos means values are climbing quickly these days – cars sold through Bonhams and Silverstone Auctions sold for £46,000 and £54,000 respectively in 2014, and it’s hard not to imagine they’ve gone up since.

The 2002 Turbo joins a slew of tantalising classics at the Russo and Steele Monterey sale on August 18-20. A 2015 Porsche 918 Weissach Spyder, 2004 Ford GT prototype, 2005 Porsche Carrera GT and 1993 Jaguar XJ220 give supercar fans something to lust after, while a host of American vintage cars and a smattering of classic Alfa Romeos, including a 1971 Montreal, provide further temptation.