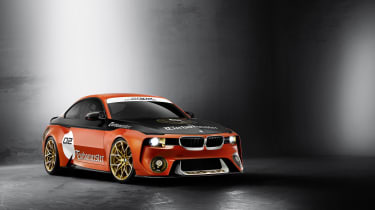 BMW has revealed a mild update of its recent 2002 Hommage concept for the Pebble Beach Concours d’Elegance.

The revised concept wears a livery reminiscent of the classic orange Jagermeister scheme worn by all manner of BMWs throughout the 1970s and 1980s – including the original 2002, as well as E21 and E30 3-series and 3.0 CSLs.

Like some of those race cars, the Hommage has prominent wheel arches. Similarity to the modern BMW M2 is no coincidence, as that’s what the 2002 Hommage is based upon, but detail changes give the concept its own style.

The front packs a reimagined version of the shark-nose style common throughout BMW’s range in the 70s and 80s, albeit with a larger kidney grille than was common back then – like cars in general, the grille is a detail that has inexorably grown over the past few decades. 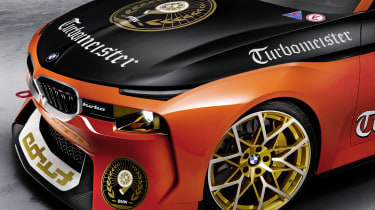 Two single round headlights stare out from the deep recesses of the grille, another nod to that early car, while a dramatic aerodynamic package – including a deep front apron and a ducktail rear spoiler – hark back to the racing versions of those 2002 Turbos.

The end result is arguably a great deal easier on the eye than BMW’s last few Hommage concepts, too.

Greatest reference is paid to the original BMW 2002 Turbo, first released in 1973. Coincidentally, such a model will also cross the auction block with Russo and Steele during the Monterey car week, a pristine example of the kind of heritage BMW wishes to evoke with the Hommage.

Of the car, BMW says it represents (with no hint of irony, given it references a car from the 70s) ‘a clear statement of how pure driving pleasure is defined in 2016’. That surely is the regular M2’s statement, but with such a rich heritage to draw upon it’s little surprise BMW wishes to do so at every opportunity. 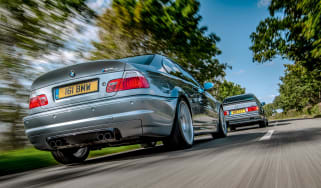