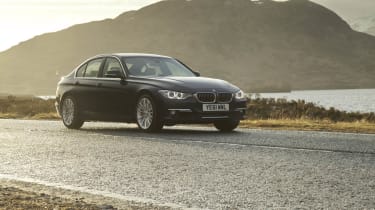 The 335i Luxury is the only model in the new BMW 3-series range to stick with six-cylinder power – for now, at least. The ‘35i’ twin-turbocharged 3-litre straight six petrol engine is carried over almost unchanged from the previous car, producing a claimed 302bhp and 295lb ft. ‘Luxury’ trim is the range-topping spec on the ‘comfort’ side of the 3-series family, meaning lots of standard goodies and a comfort biased set-up. The eight-speed autobox version of the car is the one we’re testing here.

The '35i' engine has always delivered its punch from inside a velvet glove and the mighty peak torque is available from just 1200rpm onwards. The official performance figures are deeply impressive: 0-62mph in a claimed 5.5-seconds and a top speed curtailed by one of those pesky 155mph limiters.

Selecting the new eight-speed automatic gearbox – a £1660 option – is claimed to actually boost fuel economy. BMW says that the auto returns a combined economy figure of 39.2mpg compared to the six-speed manual’s 35.8mpg, with the auto’s official 169g/km CO2 figure also dramatically undercutting the manual. Pretty remarkable numbers when you consider the power and performance on offer.

Let’s start with the engine, which is brilliant. The 335i offers something that no other new 3-series can: a six-cylinder soundtrack. The twin turbochargers provide effortless shove pretty much regardless of what the tacho’s showing, with the engine happy as happy to rev as it is to put its shoulder into requests for low down torque.

The eight-speed gearbox shifts smoothly and seamlessly – although it does seem a bit keen to respond to even the gentlest accelerator pressure by kicking down and reshuffling its ratios endlessly. You can calm it down by choosing ‘manual’ mode or by switching the engine into its ‘Eco Pro’ mode, which flattens the throttle map and tries to hold onto gears for as long as possible.

The rest of the dynamic experience is pretty similar to that we’ve encountered in the 328i and 320d with an agile, responsive chassis. It’s more mature than previous 3-series, and perhaps a little bit less willing to go and play, but drive it hard and you’ll find benign manners and a well-judged chassis balance that keeps both front and rear ends working in harmony under enthusiastic real world driving. There’s more than  enough power to steer the car from the back, should you be so minded – although the heavier six-cylinder engine does take the slightest edge of the front end responses compared to the lighter four-cylinders.

The 335i’s most obvious rival is probably the Audi S4, which carries a similar pricetag but offers more power and an extra pair of driven wheels. The BMW is more economical, though – and even if it lacks the Audi’s outright pace it offers the more focussed driving experience.

We managed 32mpg for rapid, everyday use – which seems acceptable considering how much performance the 335i offers.