Upgrade package for the BMW M2 hones the chassis and offers more power, but only one of those is worth paying for. 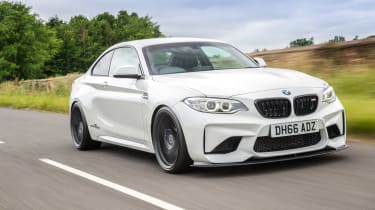 It’s arguable that the BMW M2 is the best small M-car in a generation, yet German tuner AC Schnitzer believes there’s still some room for improvement. As a result, it has developed this, the ACS2 Sport.

The package effectively massages the M2’s engine and suspension, and looks for what is claimed to be a faster and more involving driving experience. Given the standard car sets the bar quite high, it’s fair to say Schnitzer has its work cut out.

The ACS2 gets off to a good start, though, with its turbocharged 3-litre straight-six treated to a tickled ECU that delivers impressive headline figures of 414bhp and 428lb ft – gains of 49bhp and 59lb ft over the M2. The revised motor then plays a deeper tune through a quad-exit, AC- monogrammed sports exhaust.

For the chassis upgrade, Schnitzer has installed adjustable coilovers, enabling a ride height drop of 30 to 40mm, plus a set of 20-inch forged alloy wheels that just about squeeze into the arches. There are further cosmetic modifications in the form of a front splitter and rear diffuser, both finished in carbonfibre.

The first thing you notice about the ACS2 is just how well it rides. Look at those vast wheels and you’d expect it to deliver the sort of washboard ride that’d leave you with double vision, yet there’s suppleness to its damping. 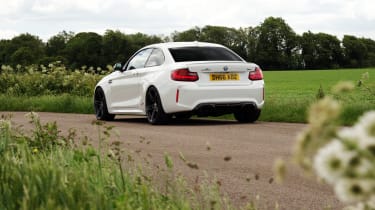 Up the pace and the car remains remarkably planted and composed. There’s the same meaty steering weight as the regular car, but the Schnitzer flows down the road, rather than beating it into submission. Really big undulations reveal the tiniest amount of float, but the movement is checked almost before it has started. The ACS2 feels remarkably friendly as you approach the limit, too, telegraphing its intentions more clearly and allowing you to push towards its various thresholds with greater confidence than in the occasionally spiky M2.

By contrast, the engine changes are harder to recommend. On paper the gains look fairly impressive, but on the road they don’t offer any real subjective gains over the already rapid M2. You have to work harder to access the extra performance low down (peak torque arrives at 3500rpm, compared with 1450rpm as standard), yet maximum power is delivered at 5800rpm, which is 700rpm lower than in the BMW.

As a result, it’s not as necessary to access the straight-six’s snarling top end. The overall performance gains are modest too, with just two tenths of a second shaved off the claimed 4.3sec 0-62mph of the regular DCT- equipped M2. And speaking of the gearbox, there are no changes to the seven-speed dual-clutch unit, so you get the same slightly lazy shifts in auto mode but much faster changes using the wheel-mounted paddles. 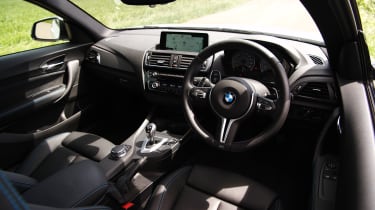 The new exhaust goes some way towards offsetting the upgraded engine’s disguised extra pace. It emits a deep burble at idle and boasts a more baritone growl as the revs rise beyond 4000rpm. However, the downside is an irritating boom at around 70mph – it goes away either side of this speed, but it has the potential to make longer journeys tiresome.

Do the sums and all the additions equate to a not inconsiderable £18,284 (that’s £3804 for the engine tweaks, £2536 for the exhaust, £2478 for the suspension, £2503 for the carbon bits and an eye-watering £6963 for the wheels). Of course, you can pick and choose just the bits you want, but is it really worth spending such large wedges of cash on a car that’s already excellent?

Add all the kit to the price of a new DCT M2 and you’ll end up forking out £66,959 – that’s M4 Competition Package money, including some choice options, and the ACS2 is hard to recommend as an alternative to that car. However, if you’ve got a used M2 then mixing and matching some of these extras – the suspension in particular – makes far more sense.