Increased performance, weight and price over an M3 Comp Pack. Er, so what’s the point? 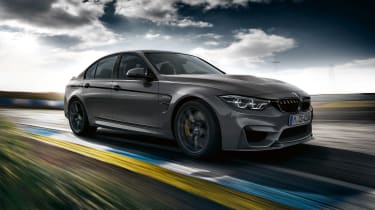 That’s a very good question and one we have constantly asked ourselves when the subject of the BMW M4 CS comes up in conversation. A conversation that always ends with “we’d rather have an M4 Comp Pack”, our current favourite coupe. So what’s the deal with the new BMW M3 CS?

BMW has now confirmed the specification and details of its new 454bhp M3 CS, which will go on sale in January 2018 and will set you back £86,380. It does, of course, following in the Michelin Cup 2s of BMW’s M4 CS launched early in 2017, but will this be enough to tempt us from an Alfa Romeo Quadrifoglio?

As with the M4 CS the new BMW M3 CS is based on the M3 Competition Pack with an increase in output from the 3.0-litre twin-turbocharged straight-six, further fine-tuning of the rear-wheel drive chassis and a body dressed in carbonfibre.

Marking the new BMW M3 CS out from the regular Competition Pack model are a number of pieces of carbon-fibre and carbon-fibre reinforced plastic. Chief among these are the roof, which saves 6kg over the standard steel item and a CFRP bonnet complete with M4 GTS air-intake, the entire piece weighing 25 per cent lighter than the metal equivalent. Beneath both the front and rear bumpers there is a carbon splitter and diffuser respectively. Further weight saving continues inside with M Sport lightweight seats. Overall the M3 CS tops the scales at 1585kg, 25kg more than an M3 Comp Pack, although the new CS is only available with the heavier seven-speed M double-clutch gearbox.

> Click here for our review of the Alfa Romeo Giulia QV

Beneath the carbon accoutrements is a honed version of the M3 Comp Pack’s chassis, which means the same adaptive dampers and upgraded springs. Like the M4 CS these have been further fine-tuned to deliver an ultimate CS spec to get the best from its standard Michelin Pilot Cup 2 tyres fitted to the same forged wheels found on the M4 CS.

Against the clock the new BMW M3 CS will hit 62mph from a standstill in 3.9 seconds and top 174mph, a result of the twin-turbocharged straight-six having had its wick turned up to 454bhp and 442 lb ft, a 10bhp an 37lb ft increase over an M3 Comp Pack. These performance gains, chassis tweaks and the carbon and CFRP bodywork will equate to a £22,155 premium over the £64,225 M3 Comp Pack with the same seven-speed M-DCT gearbox when deliveries start in January 2018.