Our M3's a short term long termer, but we'll still give it a thorough assessment 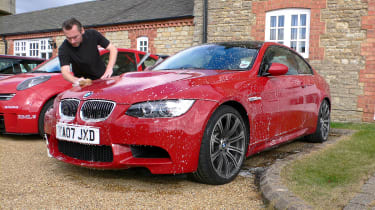 What could possibly replace the RS4? That’s what I wondered last month as I tapped in the final words of our round-up of 15 months with the Audi. Well, how about an M3? I know, I know – jammy sod doesn’t start to cover it, though strictly speaking this is not a long-term test. The BMW will be with us for just a couple of months, but that should be long enough to assess its prowess as a day-to-day prospect compared with the Audi.

I'd begun to wonder if I’d ever get to drive the E92 M3. I missed out on the twin test with ‘my’ RS4 (evo 108), and even though I was on the first two days of our M-cars test (110), when at last I’d driven everything else and went to find the new M3, I discovered that Andy Morgan had strapped a tripod and camera to it, so I left Wales without sampling it. It was more than a week later when I finally got the key.

Not surprisingly, the M3 attracts a great deal of interest and, equally unsurprisingly, I’m able to tell those who wander over for a closer look that, yes indeed, it’s a very fine bit of kit. Would I rather have it than an RS4? Now that’s a ticklish question.

I don’t think this particular shade of red is the best colour for the M3. I reckon silver is better, but even in that hue, which makes the standard carbon roof look less like a vinyl one, I have reservations about the new M3’s visual impact. All the M cues are there – the gaping grilles in the ground-skimming nose, the vast, slender-spoked alloy wheels, the quad tailpipes jutting from the rear – yet it doesn’t quite hit the spot for me. I think the reason is that the 3-series coupe shape it’s based on is just a bit lacking in tautness and muscle definition. Still, it does leave scope for the CSL version…

The interior of ‘our’ M3 reminds me of the cockpit of the Disaster Area stunt ship described in Douglas Adams’ The Restaurant at the End of the Universe; the all-black trim features carbon-look highlights and black buttons that light up black when you press them. I’m kidding about the last bit. It’s a good place to be once you’ve worked out the electric seats, trimming the tilt and achieving the desired clamping forces. Granted, this gives drivers of many shapes and sizes the opportunity to find a comfortable fit, but I never wanted to change the shape of the RS4’s simple, sculpted Recaros. And I’d argue that the quality of the Audi’s interior is of a higher level: more conservative, for sure, but the M3’s instruments look cheaper, while its frameless doors close with a less solid and satisfying noise.

Initial driving impressions suggest that the M3 and RS4 are astonishingly similar cars, their obvious differences – rear-drive versus four-wheel drive, engine behind the front axle versus engine in front – apparently outweighed by their similarities: 414bhp, high-revving V8, six-speed manual, near 1700kg kerb weight and reasonably compact dimensions. In fact, what makes them so alike is that the M3 can make confident, effective use of so much power with just rear-drive, and that the RS4 doesn’t feel like its engine is crammed between the front axle and the four-ring badge on the grille. Both are remarkable feats of engineering.

I’ve not yet had a chance to really push the M3, to feel its poise and adjustability under pressure, but I have to say that, below this threshold, on a favourite local road, I’ve got the RS4 ahead on points at the moment. However, if you’re currently in the enviable position of choosing between the Audi and BMW, the bad news is that you can’t order a new RS4 saloon anyway – with incredibly bad timing, production has been suspended to free up capacity for the R8, which is built in the same factory. So the M3 has the field to itself, or at least until the Mercedes C63 AMG arrives next summer…