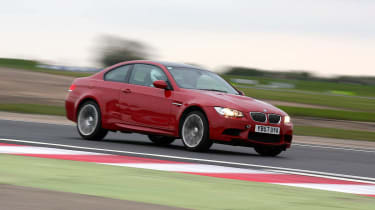 I’m sorry that Jethro’s gone. He’s a good friend and I’ll miss chatting aimlessly to him about cars every morning and taking the piss out of him for his inability to wear a cap without looking like a potato farmer from Idaho. But I have to admit that, as he walked out of Evo Towers for the last time and headed for the bus stop, I was fighting back a smile. You see, I’ve got his M3.

Driving home that evening (now I think about it, I suppose I could have given him a lift…) the memories of driving an M3 on last year’s eCoty came flooding back. There I had one of those fantastic drives when everything just seems to meld together and you take corners exactly as you want to. I put the M3 very high up on my list. In fact it had supercars either side of it.

Since then the M3 has seen off all comers in its own class too, yet sales haven’t quite lived up to BMW’s hopes. I’m sure it’s because the new M3 has crossed one of those big psychological monetary barriers: the £50,000 mark. And, unlike the engine inside, the exterior of the E92 M3 just doesn’t scream £50K. Even the carbonfibre roof can easily go unnoticed.

But I think potential buyers are missing the point. You’re paying for the hardware with an M3, and it’s now the sort of hardware that would be perfectly at home in a supercar. If you think I’m exaggerating, then look at the metamorphosis of the Audi RS4 into the R8. The fact that you can leave the M3’s supercar hardware overnight in one of London’s less salubrious streets without worry is a bonus.