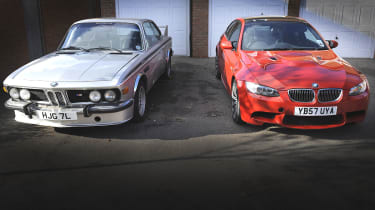 It’s a bit like that television programme Who Do You Think You Are?, where famous people go in search of their ancestors and emotionally discover that their great grandfather on their mother’s side was a guinea pig rustler who lived in Chorley. Well, this is the automotive version (television rights currently in negotiation) and in the case of the E92 M3 it turned out that its propeller-badged forefather lives just around the corner. Which was lucky.

Ever since the current M3’s launch people have been bemoaning the fact that the model isn’t what it used to be. ‘Look at the E30,’ they say. And indeed the E92 with its iDrive and electric leather seats is a very different proposition to the homologation-focused original. But its DNA actually goes further back than the E30, all the way to the early ’70s.

The 3.0 CSL was arguably the first M‑car, and parked up side-by-side with an E92 it’s amazing to see the similarities between the two. It’s a bit like finding a black and white photograph of a long deceased relative and seeing that you share the same facial features. The four circular lights are there, as is the kidney grille, and the overall size is remarkably similar too. Peering through the glass, the pedals are almost identical, from the tall, floor-hinged accelerator to the shape and tread pattern of the brake and clutch pedals. The CSL’s Scheel sports seats even share the same philosophy as the M3’s items, being incredibly supportive yet with an air of civility about them, and just like the new car, there’s only room for two in the back.

Munich may lean towards more muted aerodynamics these days, but lighter panels feature on both old and new cars – the E92 with its carbonfibre roof, the E9 with its aluminium body panels. Under the skin there are MacPherson struts at the front of both cars, although the CSL’s semi-trailing arms have been replaced with a multi-link set-up at the rear on the M3. It’s the figures for the older car that really show the 35-year age gap, though: 200bhp at 5500rpm, 204lb ft at 4300rpm, 0-62mph in 7.5sec and a top speed of 137mph.

This car, which belongs to Chris Wright, is one of only 500 right-hand-drive CSLs built, and in common with most UK examples it came with the City Pack, which put back a few creature comforts including glass windows (instead of laminate ones), the bumpers and some sound deadening. It’s fantastically original, but it’s also in need of some love and attention, so Chris is currently going through the agonies of deciding whether he can afford to restore it himself.

Seeing the M3 sat in the sun I wanted to keep it more than ever. Paul Lang, evo’s art director, clearly shared my feelings – he threatened to chain himself to YB57 UYA on the day it was due to go back. He wasn’t the only one who liked the M3 either. In fact I can’t remember a more popular long-term car. Ever.

There are plenty of little things I’ll miss about YB57. I frequently got into other cars after driving it and waited patiently with my left hand over my right shoulder expecting the seat belt to be passed to me. The ‘M’ button, which lets you change the car’s set-up without having to take your hands off the wheel, is brilliant. The iDrive also makes complete sense once you’ve lived with it for a while. Tuning the radio with the big silver dial was particularly easy (and therefore safe), although I shunned the DAB tuner in favour of FM or MW as it seemed to have trouble holding a signal.

Cleaning the car out before it went back I found various reminders of our time together. Rally stickers from when the M3 went to Ireland and the Isle of Man to act as my recce car and generally make everyone else in the service area jealous. A nearly empty container of 10W-60 Castrol Edge Sport oil – it was recommended, and I only had to buy one bottle, but at £13.99 for a litre it wasn’t cheap! The towing eye was in a cubbyhole, John Barker having enjoyed several trackdays at various angles of oversteer. Amazingly we only got through two sets of Michelin Pilot Sport Cup tyres (the same found on the 911 GT2) despite the fact that they looked like slicks even when new.

The M3 was an awesome long-distance car too, and the combination of a supercar-worthy engine with Isofix-point practicality was like manna from heaven to those who had to do a school run. But I’m sure you can guess what I’ll miss most about the M3. When the road was clear and the V8 was in that insanely powerful band of revs homing in on 8500rpm, then it was just magical. The front end would lock onto line as you threw it into a corner, the front tyres feeling like they were coated in super-glue, then the rears would flex and slip to each touch of the throttle before you howled off towards the next corner faster than figures can convey. I won’t forget those moments.