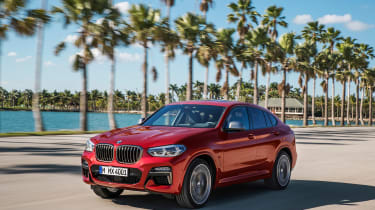 BMW’s relentless focus on the SUV/coupe sector shows no sign of waning with the release of an all-new BMW X4. Based on the ‘G01’ X3, the new X4 follows the same basic recipe as the original, sitting neatly between the X2 and X6 in the firm's coupe SUV line-up.

Despite its niche appeal, the original X4 sold over 200,000 units over a production run of just four years. This new version builds on that car’s ideology, sharing most powertrains, front-end styling and interior design with the X3. This is no bad thing however, as the new car is a far more comprehensive package than before, with an array of excellent BMW powertrains and a much improved interior compared to its predecessor.

The new X4 adopts the new X3’s basic aesthetic penned by BMW designer Calvin Luk. The assertive front end and its oversized kidney grilles now sit in front of a swooping roofline and more heavily sculpted rear haunches. At the rear is BMW’s first application of its next-generation rear lighting units, a design that will also be seen on the upcoming 8-series coupe and Z4. 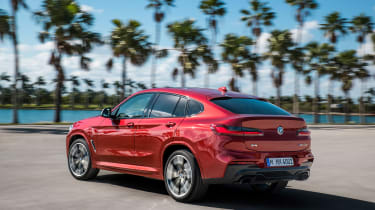 The BMW X4 will be introduced with six powertrain options, split evenly between petrol and diesel. All are connected to BMW’s xDrive all-wheel drive system and the range is topped with the aforementioned M Performance models. The most powerful variant will be the X4 M40i, featuring the same 3-litre turbocharged straight-six as in the X3 M40i with 354bhp on tap. New for the X4 is an M40d variant producing 321bhp and a whopping 501lb ft of torque via a turbocharged straight-six diesel engine. The two X4 M Performance models will hit 62mph in 4.8 and 4.9 seconds respectively, impressive numbers considering their relative bulk. A further 30d six-cylinder diesel model will also be launched later in 2018, likewise a hot X4 M.

The M Performance versions don't just harbour a tweaked engine though, as both feature bespoke styling touches inside and out, as well as an active exhaust system, bigger brakes and optional M Performance adaptive suspension. 20-inch wheels are standard fit, with 21s on the typically vast options list.

The interior is much the same as in the X3, meaning a combination of excellent build quality and the latest iDrive infotainment system wrapped up in a sophisticated and well-presented package. Thanks to the low roofline, expect the rear quarters to be a little more cramped than the more upright X3, likewise its luggage area.

BMW will also bring across its M Sport X trim level alongside the usual M Sport and X Line styling packages, which like on the smaller X2 will feature grey styling front and rear and wheel options right up to 21-inches. 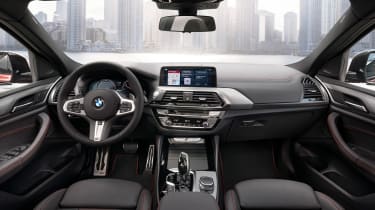 Although we still prefer compact estates to this type of high-riding SUV, there is no denying the growing global market for models of this type. With the X3 already having proven its worth dynamically, the more road-focused X4 might just be the car to usurp the Porsche Macan as the best-driving SUV currently on sale.