Not only has AC Schnitzer tuned the Supra, it’s also turned its handed to the range-topping BMW Z4 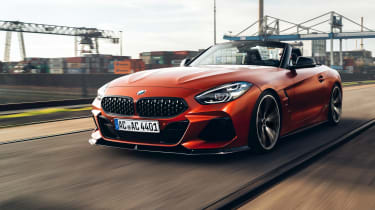 Following on from its take on the B58-equipped Toyota Supra, German tuner AC Schnitzer has worked its magic on the G29 BMW Z4 M40i - while also announcing upgrades for lesser 4cyl variants. Additions to the M40i include a healthy bump in power, upgraded interior components, changes to the exterior trim and more.

As with the fettled Supra, AC Schnitzer has taken the 3.0-litre, turbocharged B58 straight-six from its factory 335bhp, 369lb ft figures, to a very respectable 394bhp and 442lb ft of torque. This represents increases of 59bhp and 73lb ft over stock and, for reference, the new numbers put the Z4 Schnitzer just ahead of the standard BMW M2. Performance after the bump in power is yet to be measured, but a 0-62mph sprint of under the 4.6sec stock time is to be expected. Power upgrade kits for the 4cyl 30i and 20i models are also in the pipeline.

Inside, owners are also treated to a host of uprated aluminium components, ranging from a new set of shift paddles behind the steering wheel to higher quality pedals.

A standard Z4 M40i will cost you from £49,050, however pricing for the upgrades hasn’t been announced. Should the prospect of tuning a brand new BMW concern you, fear not, as a 5-year warranty comes with any work carried out by AC Schnitzer.