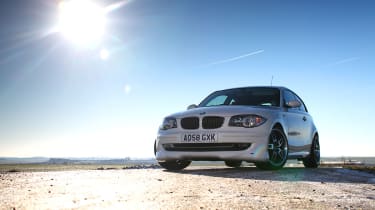 Without looking at the spec box, how much road tax would you expect the owner of this car to pay? It has rolled out of a German tuning company’s workshop with bling wheels, a body kit, a remapped engine and sports suspension, so it’s natural to assume that it must be a 135i rival. Yet it is actually based on the lowly 118d, a car that produces just 119g of CO2 per kilometre and, as a result, would cost you just £35 a year in road tax.

You’re probably now thinking that the ACS1 Sport Eco (see what they did there?) is a sheep in wolf’s clothing, but it isn’t. Under the bonnet AC Schnitzer has fiddled away and released another 30bhp and 44lb ft over the standard 118d. Whilst this doesn’t exactly make it a firecracker it does make for easy overtaking and surprisingly swift progress. Even more pleasingly the throttle response is excellent for a diesel, crisp from the top of the pedal with an engine that’s keen to rev, making the ASC1 feel livlier than most oil burners.

The most impressive part of the package, however, is the suspension. Once again it’s a case of not judging on appearances, because where the bigger wheels and lowered ride height would suggest an unfeasibly crashy experience on a B-road, the reality is very different. The ride is undeniably firm but it’s never harsh, and where M Sport suspension tends to give the 1-series a very bouncy back end, Schnitzer’s Eibach and Bilstein set-up has much tighter control over the rear with improved rebound damping.

Heading into a corner the steering is accurate and well weighted but just slightly lacking in feedback. Unsurprisingly, there is generally more grip than power, so you tend to spend most of your time with your foot welded to the bulkhead, but at this time of year, when roundabouts are second cousins to skid pans, there’s more than enough torque to encourage a bit of gentle hooliganism.

And all this whilst slurping merely thimbles of fuel. The official combined consumption figure for the standard 118d is 62.8mpg. In reality that’s quite hard to achieve, but even with the extra power and torque its possible to attain numbers in the 50s with the Schnitzer. Drive it as hard as you can and you’ll still see over 40mpg, which is undeniably satisfying.

The ACS1 is genuinely fun and impressive, then. Yes, there are quicker diesels, but that’s not the point. This car has been designed to bring a bit of joy specifically to tax band B. And when the alternatives are a Polo BlueMotion or diesel Mini, the Sport Eco looks like a bit of a hero.