Caterham cars at 60 – history, present and future of the British sports car brand - On the road in the Caterham 620R

On the road in the Caterham 620R

We plot a course for our next destination, which is on the other side of London, in Cheshunt, Hertfordshire. What lies there isn’t the very beginning of the Seven story, but it’s where the car’s success was first realised. It’s a short blast up the M23 and then clockwise around the M25, and given that it doesn’t look that far on the map and the sun is shining, I take the plunge and lower myself into the 620R. I should really start steadily with the 160 and work myself up to the unhinged 620, but the lure of its bright yellow paint and invigorating performance is too much to resist.

It’s been around for four years now, but the 620’s mechanical make-up is still worth repeating. At its heart is a 2-litre four-cylinder Ford Duratec that uses a supercharger to boost power to 310bhp and torque to 219lb ft. Both these figures are delivered way up the rev range (7700rpm and 7350rpm respectively), which gives a big hint as to this car’s fast and frantic character. This impression is further enhanced by the standard-fit six-speed sequential gearbox, which drives the rear wheels through a racing-specification paddle-clutch.

The trackday focus intensifies with the suspension, where you’ll find the springs and dampers have been stiffened. There’s also a wider front track and Caterham’s more sophisticated De Dion rear axle. Tiny 13-inch alloys are standard, while the tyres are Avon ZZRs, which are effectively cut slicks. Let’s hope the rain holds off.

> Click here for our Caterham 620R review As we crawl out of Crawley, it’s the noise and vibration that strike you first. Even clean getaways result in a juddering from the driveline, while the rear suspension and differential are constantly clonking away. If you’ve just stepped out of a soft-centred saloon then you’d be convinced something was broken. However, you soon realise that this is just the price to pay for the 620’s ability to form a telepathic link with the driver when the road gets interesting or you hit the track. There are no rubber bushes here, and ‘NVH’ was clearly a dirty word (well, initialism) during the development process.

Yet despite all this, the 620 proves to be far more composed than you’d think. The carbonfibre bucket seats are hugely supportive, while the low-slung, laid- back driving position is surprisingly comfortable. The wind deflector also does a good job, and providing you wear glasses there’s little need to don a helmet when cruising on the road. You’ll get the odd fly in the face, but it’s a small price to pay for the panoramic visibility. There’s also plenty of heat-soak through the floor and transmission tunnel as that tuned 2-litre tries to keep cool in the hot, still air. The haze rising off the bonnet makes the view ahead look like the beginning of a dream sequence in an ’80s soap opera.

The rabid 620 feels like the ‘Spinal Tap’ Seven – everything’s been turned up to 11. The supercharged motor is so strong that even if you use no more than 4000rpm you’ll be just about the quickest thing on the road. Suck up the courage to wring every last rev out of the 2-litre and all hell breaks loose. Even in bone-dry conditions and with heat in the tyres, the rear wheels will start spinning as the engine screams beyond 6000rpm in first and second gear. When rubber does hook up with tarmac, though, the results are devastating. The 620 effectively teleports you between corners in what feels like a split second of angry noise and blurred tugs on the sequential gearshifter. 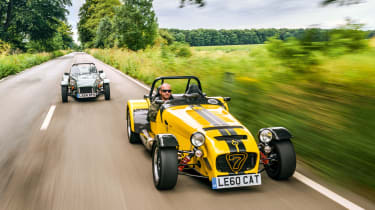 The twisty bits are dealt with in a similar manner. The nose dives toward the apex with barely any input from the steering, the rubber clings on with body-crushing tenacity and that motor fires you down the next straight, which always seems half as long as you first thought.

Like in the 160, big bumps and sharp ridges can catch the chassis out, but with so little mass at work, the Seven checks itself before anything approaching waywardness. And with so much power and such a precise throttle, you can choose at will your angle of attack as you exit slower corners. It’s intoxicating and life-affirming, yet there’s also a moment of relief when we join the relative calm of a trunk road.