I’m grinning ear-to-ear by the time we turn down Potash Lane and arrive at Lotus HQ. The British sports car brand has recently been bought by Chinese giant Geely, and the collection of modern, glass-and-silver-clad buildings is a far cry from the ramshackle setup of ’66. 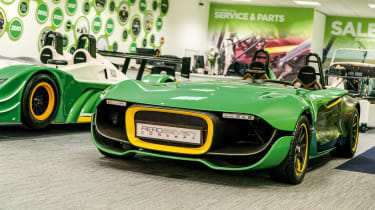 However, Chapman’s desire to modernise the Seven resulted in the controversial Series 4, which debuted in 1970. Essentially an all-new car, it featured angular glassfibre bodywork, double-wishbone front suspension from the mid-engined Europa and a choice of Ford 1.3- and 1.6-litre engines, or Lotus’s own Twin Cam. Purists weren’t impressed and Lotus, eager to promote itself as a thoroughbred sports car manufacturer and not a producer of cheap kit-cars, pulled the plug in 1972.

This was far from the end of the road for the Seven, though. Since 1959, a Surrey-based workshop called Caterham Cars had been a sales agent for the car and over the years had become the centre of the Seven universe. It was run by businessman Graham Nearn, who’d spotted the little Lotus’s potential and made numerous attempts to buy the manufacturing rights. Finally, in 1973, Nearn’s hard work paid off and he struck a deal for the rights to build the Seven.

Initially, around 60 S4s were made, but Nearn knew the real interest was in the classic S3, which was both more popular with punters and easier to produce from his small premises in the town of Caterham, Surrey.