Caterham cars at 60 – history, present and future of the British sports car brand - To Hethel in the Caterham Seven 160 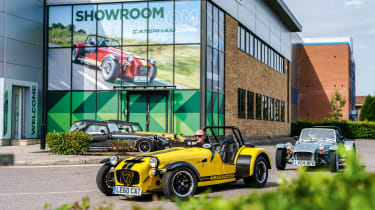 To Hethel in the Caterham Seven 160

For the trip north I choose the slightly more sedate 160. With its windscreen, doors and padded seats, it feels like the height of luxury after the 620. We initially follow the path of least resistance, spearing up the A11. But snapper Dominic Fraser is a former Norfolk-er and before long he’s plotted a cross-country route that takes in Thetford and Wymondham.

These B-roads are just wide enough for two cars and mix fast corners with challenging blind bends. Perfect Caterham country, in other words. Better still, they’re deserted, which makes the 160’s retro feel all the more fitting. With its live rear axle, skinny 155-section tyres, a view down the bonnet that ends in a pair of chrome-backed headlamps and those front wheels bobbing up and down in rhythm with the road, this is as close to original Seven motoring as you can get. Only the occasional chatter from the wastegate of the 660cc turbo three-cylinder Suzuki unit pulls you back to the present.

It’s nowhere near as breathlessly quick as the 620, but with a dry weight of just 490kg, the 80bhp triple can crack 0-60mph in 6.9sec. There’s plenty of torque too, and you’re soon making brisk progress, flicking the stubby gearlever around the gate to make the most of the smooth and thrummy engine’s limited output. Narrow tyres mean the 160 moves about more than other Caterhams, but the handling is beautifully progressive and any slides happen at such modest speeds that they prove to be hilarious rather than heart-stopping. Sharp bumps can upset the old-fashioned rear axle, but the resulting hops and skips are well controlled by the dampers. 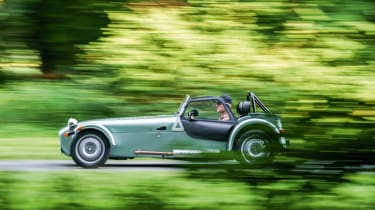