Caterham cars at 60 – history, present and future of the British sports car brand

For most people , the arrival of a 60th birthday is usually a sign that it’s time to slow down a little. Maybe even consider retirement. However, after six decades on sale, the Caterham Seven has no intention of kicking back.

Three-score years on from its debut as the Colin Chapman-penned Lotus Seven, this lithe and lightweight machine is still setting the standard for drivers seeking hardwired driving fun. And it shows no sign of settling for the pipe and slippers just yet, with ever-faster versions and technical innovations keeping it fresher than its 1950s styling cues would have you believe.

In an age of autonomous vehicles, the Caterham remains an ever-present reminder of the joys of being in total command of a car. This is driving in its rawest and most rewarding form. So what better way to celebrate this remarkable car’s success than with a road-trip that takes in landmark locations that have played an integral part in the history of this resilient machine? And what better cars to choose than the models that bookend Caterham’s range today – the entry-level 160 and the deranged 620R.

The former is the embodiment of the 1957 original, with its focus on lightness, simplicity and affordability, while the latter is a vivid demonstration of just how far the Seven concept can be stretched. Both are widely different in their approach (and price), yet each is spun off the same underpinnings, which have been carefully and constantly evolved over the decades. 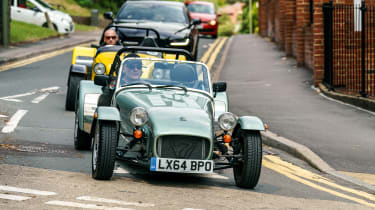