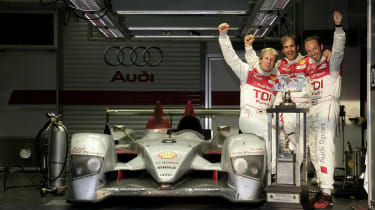 In the plus column, they’re undoubtedly fast, reliable and relatively economical, in a sport where those factors really matter. And their advantages haven’t led to stagnation within the sport – the cars aren’t so dominant that other manufacturers have shied away from introducing their own hybrid prototypes to chip away at Audi’s many records.

On the negative side, some still bemoan the racers’ lack of noise when watching trackside. Anyone who has seen the R18 TDI e-tron prototypes whoosh by will be familiar with the differences between them and the screaming Toyotas.

Back in 2006 though, the cars’ dominance was less assured. The R10 TDI was the first time any team had attempted to win the race with a diesel engine (though not the first to compete – that honour fell to the Delettrez brothers with a 4.4-litre diesel racer in 1949). 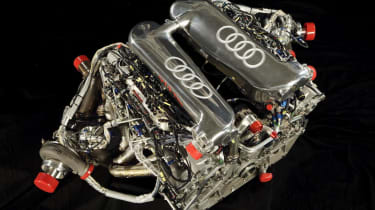 Audi didn’t take half measures – the R10’s diesel V12 developed as much as 650bhp and put 811lb ft of torque to its rear wheels. The team’s confidence in the car’s ability was confirmed by its decision to run the same engines in the race as it had used in all practice and qualifying sessions – though to ensure longevity, Audi had to limit mileage during those sessions.

It paid off: while car number 7 suffered issues during the race, Frank Biela, Emanuele Pirro and Marco Werner secured victory in car number 8, making history in the process. The engine had covered nearly 4000 miles in all sessions and to illustrate its cleanliness, a swab of each tailpipe with a napkin came up clean.

Such a feat has undoubtedly helped Audi promote diesel technology in its road cars, and with the advent of the e-tron quattro racers, two more technological frontiers can be used to please the marketing men.

All this would be to naught were the cars no longer competitive, but Audi’s results speak for themselves. Only once since 2006 have its diesels failed to win – and that car, Peugeot’s 908 HDi FAP, racked up yet another victory for the fuel itself.

And as Dickie Meaden found out when he tested 2014’s winning R18 e-tron quattro at Misano in Italy, the cars are also mind-blowing to drive – and far from silent.