If you value driving thrills but can't stretch to the price of a true supercar, a sports car could be the ideal middle ground 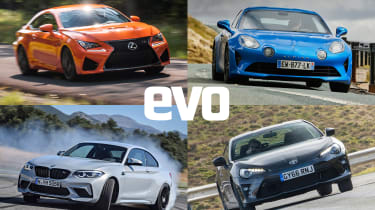 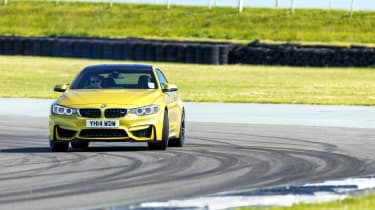 The BMW M4 didn’t fare so well a while back in evo Car of the Year 2014 (issue 203). In the years since, though, the handsome coupe has grown on us, showing itself worthy of the M badge.

The straight-six configuration that featured in the E36 and E46 M3 is revived and paired with twin turbos to produce 425bhp and 406lb ft of torque. The high-revving, climactic character of previous M3s has been sacrificed, but not totally in vain, as real-world performance has been significantly elevated.

Thankfully, BMW has kept the third pedal – as standard. The majority of cars, though, are optioned with the seven-speed DCT – still accomplished but no longer amongst the best dual-clutch units. Its tendency to provoke wheelspin on upshifts by introducing a fat wad of torque on a pinned throttle can be disconcerting. That delicate deftness of the older models has been sharpened for a spikier edge.

> Read our full review of the BMW M4 here

The trustworthy helm is a direct and accurate gateway to extract the grip and agility, lending itself to controllable small slides in M Dynamic Mode. In the wet it’s a tricky customer and on cresting roads the body feels wayward. When all is right in the M4 it is fantastic, but unfortunately these times are few and far between. 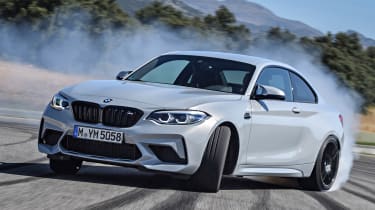 An upgrade to the BMW M2, the new BMW M2 Competition is a nod to the old-school way of doing things in the sports car arena. Power is sent behind, from the engine upfront, through a manual ’box in the middle.

A DCT is available, but the manual is a truer match for the vigour and vim of the squat coupe. The manual’s six (rather than the DCT’s seven) ratios are plenty to deliver impressive acceleration from the twin-turbocharged six-cylinder engine from the larger M4 (and M3, of course).

Other tweaks for the Competition include chassis tweaks to provide extra strengthening for the bodyshell and stiffer rear axle mounts. To maximise the gains delivered by these upgrades BMW’s engineers have also recalibrated both the ESP and the electronically controlled limited slip differential.

The M2 Competition is lithe and nimble, easily threaded at speed down a challenging road with an air purity to the process. Get generous with the throttle and the M2 becomes as angry as its bulging, short overhangs suggest, kicking out its tail – and hanging it there – with ease. 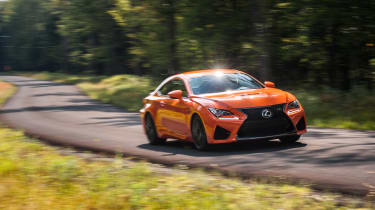 Unique amongst its peers, the Lexus RC F breathes without assistance. The RC F subscribes to the enthusiasts’ saying ‘no replacement for displacement’, being propelled by a 470bhp 5-litre V8. It sounds as sweet as you’d hope, but all the noise doesn’t translate to the expected pace. At lower revs, every one of the car’s 1765 kilos is felt, and the engine needs revs all the time to compensate for the ample, low-down torque of its rivals.

The weight continues to make itself felt when you load the chassis with lateral force. Inputs to the handling are met with lethargy rather than alacrity, though the steering rack is well weighted and calibrated in accordance with the supple setup. It's an enjoyable if not heart-beat-raising drive.

The RC F claws back points when you hop aboard, where you’re welcomed by an aura of refined quality – you know it’s a Lexus. The seats hold you well but don’t seem to have the desired vertical adjustment to sink your hip point low enough into the chassis. 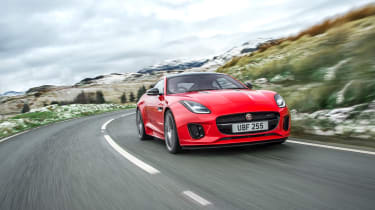 The Jaguar F-type isn't short of British sex appeal. One of the prettiest Jaguars of the modern era, it is a rather good drive too. There are numerous ways to spec an F-Type: coupe or soft-top, rear- or four-wheel drive, manual or auto, and with five different power levels from three different engines to choose from. We are yet to drive the new entry-level four-pot.

The supercharged V6 in either state of tune is responsive and linear, sounding out a volley of pops and parps as you shuffle through the six-speed manual or eight-speed auto (the sole choice if you want all-wheel drive). The V8-engined R packs serious muscle, directing 542bhp rearwards or to all four corners. The extra speed and weight (in the nose) with the V8 means you enter corners more gingerly, but exit slightly leaden of foot while the 5-litre exhales sonorously via a quartet of pipes.

The V6 cars’ greater neutrality and rear-biased balance lend themselves to apparent oversteer on rear-driven versions. The 375bhp S gets a mechanical limited-slip differential, all the better for managing the oversteer. The V8 cars are less biddable, so opting for four-wheel drive to cope with all the extra shove is understandable and by no means robs you of enjoyment, but it does strip away a few layers of excitement. 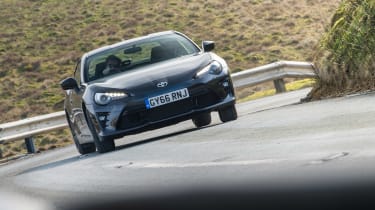 The four-pot boxer’s meagre 197bhp and asthmatic 151lb ft of torque is barely enough to overwhelm the stiction limits of most tyres – unless, as here, those tyres are both skinny and offer low rolling resistance. The GT86/BRZ experience is all about sensation: perceiving body movements, grip levels and pitch and yaw through the seat of your pants.

Finding the perfect driving position is a cinch. The ride is unforgiving but not unyielding and is worth enduring. Push hard and you’re greeted by a wide window where the minutely resolved chassis allows you to tiptoe comfortably on the limit. The clarity with which you sense the grip dissolve and rebuild at the rear axle as you metre out throttle inputs is a glorious thing. While this is very enjoyable, you can’t help but think what a real set of tyres would do for the car.