evo's pick of the best lean, green and fast electrically-assisted machines on sale today in our top ten hybrid list 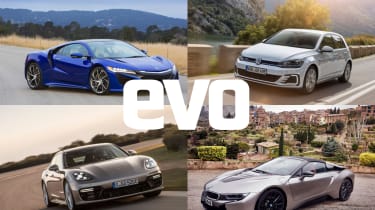 With legislation seemingly favouring the hybrid and erroneous media reports on the premature death of the internal combustion engine it’s hardly surprising the onward march of hybridisation of the performance car continues apace.

When applied to the kind of cars evo adores, hybrid technology can do two things. Additional electrification can improve fuel economy and exhaust emissions, keeping powerful and sporty cars on the right side of acceptable in an increasingly eco-conscious world. Or, more excitingly, it can be used to supplement a combustion engine – flattening out the torque curve, providing an extra kick when moving off the line and generally aiding power and performance where you need it.

All good things on paper, then, but there are some caveats. Weight, for example; batteries, motors and all the associated hybrid car gubbins are heavy. The hybrid VW Golf GTE weighs a full 170kg more than its petrol GTI cousin, and that additional heft blunts performance and handling. Though most hybrids are actually proving very reliable, as with any sophisticated and relatively new technology, there’s also the concern that expensive parts and intricate repairs could be needed further down the line.

We’ve cherry-picked the best and most evo-friendly hybrid cars on the market today.

Before we get into evo's favourite hybrid cars of today, some explanation. The term 'hybrid car' is a relatively loose one as there are a few different ways to adding electrical assistance to a car with an internal combustion engine. We’ve rounded the key hybrid car technologies below…

The first car that springs to mind for most people when you mention the word hybrid is the Toyota Prius. As the first commercially successful hybrid vehicle, its approach to electrification set the template for plenty of other hybrid cars that were to follow – for better or worse! Both petrol and electric power sources work either together or separately. At lower speeds, the petrol engine will be turned off so the car is driven by the electric motor only, though when under hard acceleration or high speeds, both power sources work together to provide more power. 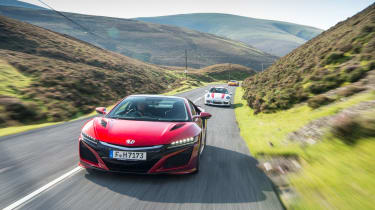 Mild hybrids are a step down from conventional full hybrid cars. Generally unable to power the car through electric power alone, the electric motor is instead used to assist the petrol on startup and when accelerating. Under braking, the motor reverses, providing a regenerative effect and recharging the car's battery. This kind of hybrid system can even be paired with a manual gearbox and is similar to the KERS (Kinetic Energy Recovery System) used in Formula One.

Plug-in hybrids take a conventional hybrid powertrain and, as the name suggests, add a plug socket. Larger batteries allow most plug-ins to complete longer distances on electric power alone – up to 50 miles in some cases, after which point they revert to being a conventional hybrid.

Extended range vehicles are as close as you will get to a fully electric car in the sense that the petrol motor plays the smaller role in comparison to the electric one. The petrol motor is used simply as a generator to recharge the batteries used to power the electric one, and so therefore extend the range that the car can travel to on a single charge. It is a very clever and efficient system for someone who wants a purely electric vehicle with the added convenience of a longer range that can be extended quickly by a top-up with petrol.

Now you have a brief idea of the hybrid technology on offer, take a look at our pick of the top 10 hybrids around today. Bear in mind that this list is not ranked – how could we compare a family hatch to a £150k supercar?