The top ten most expensive cars you can buy, including the Bugatti Veyron, LaFerrari and McLaren P1 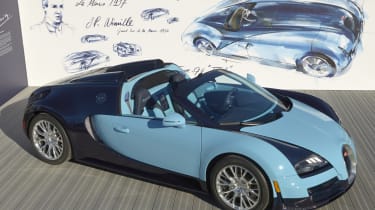 There are supercars in the world, and then there are these: the top ten most expensive cars money can buy. Reserved for the super rich, this list contains some of the fastest and most extreme cars ever made for the road. The list contains the best cars from Ferrari, Lamborghini and Porsches, and of course Bugatti...

First revealed at the 2013 Geneva motor show, the Lamborghini Veneno is an extreme-looking, limited production supercar. It features the same running gear as the Aventador LP700-4, albeit with a dose of extra power, pushing out 740bhp. Lamborghini originally planned to build just three Venenos, but rumours suggest that it could build a further nine roadster versions.

This is (possibly) the last ever incarnation of the Pagani Zonda, and serves up a staggering 789bhp and 538lb ft from its 6.0-litre V12 engine. With a kerbweight of 1070kg, the same as a junior hot hatch, the Revolucion hits a top speed of 233mph and does 0-62mph in 3.0sec. Sadly it’s not road legal, meaning you will have to opt for the slightly less-extreme £1.5m Zonda 760RS.

Although the Veyron is now almost ten years old, it’s still the car with the highest top speed. The drop-top Grand Sport Vitesse can be had from £1.7m, although if you want one of the many special editions, the price will be significantly higher. After an unrestricted run at the Ehra-Lessien test track in Germany, the Veyron Vitesse is officially the fastest convertible money can buy, after topping out at 254mph.

With 1115bhp coming from the in-house developed 5.0-litre twin-turbo V8 (when it’s run on E85 bio-ethanol fuel), the Koenigsegg Agera R is one of they could be described as savage. Koenigsegg claims a top speed of more than 260mph, and 0-60 mph of just 2.9secs. Perhaps the most impressive figure for the Agera R, is its 0-200-0mph time of 24.96sec.

It’s fair to say that there was slight confusion over the Ferrari LaFerrari name at the Geneva motor show launch, but there’s no denying that the Enzo replacement caused a stir. It uses a hugely powerful naturally aspirated V12 engine, along with some electric motors to generate 950bhp and 664lb ft of torque. A total of 499 will be built in Maranello.

The Huayra introduced the new generation of Pagani, replacing the beloved Zonda, and saw the introduction of the AMG-built, 7-litre turbocharged V12 engine. evo rates the Huayra so highly that it positioned joint first with the Lotus Exige S in the 2012 evo Car of the Year shootout. Don’t let the comfortable, and exquisitely crafted interior fool you into thinking this is a GT car – as soon as you start using the car’s performance, it reveals one of the most capable supercar chassis out there.

It might look like a bit like a stretched Lotus, but that’s where the similarities end. This list contains a fair few 1000bhp-plus hypercars, but this Texas-built Hennessey Venom GT boast the highest power output – with 1244bhp from a highly-tuned 6.2-litre Corvette ZR1 engine. Made pretty much entirely from carbon fibre, including the wheels, the team at Hennessey built this to be the ultimate supercar.

It’s the fastest McLaren road car since the mighty F1, but the P1 isn’t chasing top speed, but with GT3 racing levels of downforce, active aerodynamics and a racing-inspired hybrid system it will be somewhat quicker over a timed lap. The 12C’s modified twin-turbo engine has been used, along with a hybrid drive system, to produce a combined 903bhp. It also borrows the 12C’s carbon ‘MonoCell’ tub, although the car looks significantly different.

Perhaps the most usable (and economical) supercar of this group, 918 Spyder is Porsche’s sensible answer to the LaFerrari and McLaren P1. With a free-revving 612bhp V8 engine – borrowed from an LMP1 racer – and 270bhp of hybrid electric motors, the hyper-Porsche can do a claimed 0-62mph time of 2.8sec and 211mph-plus top speed. You can trickle along on electric only for up to 20 miles, and the batteries can be fully charged in 25 minutes via Porsche’s high-speed charger.

Not in the mood for all of these searingly quick performance cars? The final car on our list is the Rolls-Royce Phantom ‘extended wheelbase’, which offers one of the most luxurious ways to get around on four wheels.

The 2020 Porsche 911 Turbo hasn’t been with us for long, but a raft of packages and optional extras are already in the pipeline
Visit/mercedes-cla45-amg-hatchback/22953/mercedes-amg-cla-45-s-coupe-uk-review