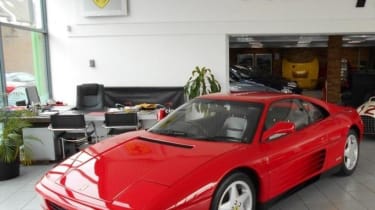 Love or hate the continual rise in classic performance car pricing, there’s a very good reason the F40 in particular seems to climb ever higher.

There’s the iconic looks, for a start. The supercar concept is ever evolving, but the F40’s wedge-like profile, enormous rear wing, slatted engine cover and businesslike detailing are one of the shapes of the 1980s.

The turbocharged V8 engine – a setup Ferrari has returned to with the 488 GTB – takes some credit too. Off boost you might wonder what the fuss is about, but as the turbochargers spool the acceleration is vicious – thanks in part to the car’s low 1100kg kerb weight.

It is, purely and simply, an exciting car. And while the latest hypercars deliver performance well beyond that of the F40, the older car’s analogue nature is becoming ever more desirable as modern cars are taken over by technology. 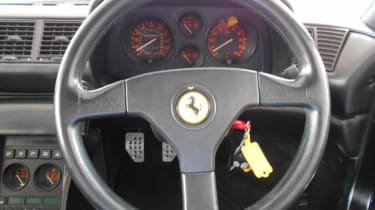 It’s also grown more expensive – the rakish 1980s lines are in vogue right now, and 348s, 355s and others from the era are, like the F40, being seen as analogue driving machines, free of electronic intervention, automated gearboxes and other modern accoutrements.

The once-berated handling characteristics can still catch out the unwary – when we last drove a 348, evo Features Editor Henry Catchpole said, ‘Turn in positively with that lovely steering and suddenly the engine behind you feels like it’s mounted very high up. The weight instantly wants to come round behind you and, unnervingly, it feels almost like the 348’s picking up an inside real wheel’.

This particular car has covered 60,090 miles in its time, and looks as good as immaculate. It’s possible to find 348s cheaper – mainly in left-hand drive – but if the market continues the way it has been, then they’ll soon be out of reach.

> Find Ferrari 348s for sale through Classic and Performance Car

Celebrating the last three decades of operations, Bugatti gathered all three of its flagship hypercars in Dubai
Visit/bmw/5-series-saloon/22919/2020-bmw-5-series-m-sport-facelift-spied