RM’s Villa Erba auction lots have been revealed ahead of the sale on May 25. These are the highlights 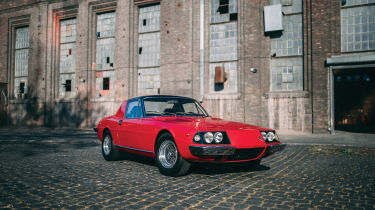 It’s not every day a bespoke coachbuilt Ferrari comes up for sale, but rarer still is one that deviates quite as much from its original form as this 1967 Ferrari 330 GTC Zagato, which will headline RM Sotheby’s Villa Erba sale in Como later this month.

The body, designed and manufactured by Carrozzeria Zagato, was fitted in Italy after the 330 GTC’s original body suffered light damage in the United States. The 330 GTC Zagato was then subsequently revealed at the 1974 Geneva motor show, differing from other Ferraris of the time with its hard edges and a unique targa roof.

Purists can make up their own mind about whether the design is successful or not, but it is certainly distinctive. The car eventually found its way back to the U.S, where it was entered in concours events around the country, including Pebble Beach. As one of only a handful of Zagato-bodied Ferraris, this 330 GTC Zagato remains an eye-catching and historic model.

The rare Ferrari is not the only bit of stylish Italian metal in the 2019 Villa Erba sale, with a stunning 1973 Alfa Romeo GTA 1300 Junior Stradale by Bertone also starring. Just 193 GTA 1300 models were produced by Alfa Romeo, differing from the more common GT Junior by a variety of detail changes to the Tipo 1.3-litre engine, new pressed wheels and bespoke decals. This specific example has only two private owners from new, the first of which imported it to Japan in 1983 where it remained for 35 years.

Another noteworthy lot is a 1957 Porsche 550A Spyder by Wendler, one of just 40 units built. Initially sold to Danish racing patron Preben Andersen, this example competed in local racing events in Scandinavia, before then being sold in 1958 to John Manussis, a British racing driver based in Kenya. The car subsequently competing in motorsport events throughout East Africa, before returning to Europe.

The Villa Erba sale is held in the historic town of Como, in the Italian Lakes, together with Italy’s most iconic and prestigious concours events, the auspicious Concorso d'Eleganza Villa d'Este.