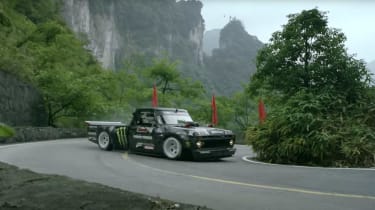 If Volkswagen holds the record for the fastest way of getting to the top of the 99-turn Tianmen Shan mountain road in China, then Ken Block can now lay claim to the most spectacular run.

Back in September Le Mans winner Romain Dumas drove the Volkswagen ID.R prototype up the 6.77-mile public road in 7min 38.585sec. Block’s latest video is longer than that single run alone, but while the American driver wouldn’t have come close to matching VW’s time, it’s probably more satisfying to watch.

Called Climbkhana Two, it follows the first Climbkhana video up Pikes Peak – appropriately, another venue where VW’s ID.R holds a course record. And true to form (and his previous run of Gymkhana videos), Block is virtually never travelling in a straight line.

His vehicle choice for the latest video is once again the ‘Hoonitruck’ – a 1977 Ford F-150 pickup, gently massaged (OK, completely transformed) with a Ford GT-derived EcoBoost V6, producing 914bhp and 702lb ft of torque, through all four wheels.

It’s primarily a vaguely F-series-shaped shell draped over a space frame, and at the centre sits Block, controlling this huge output with a steering wheel, pedals, and two large levers – one being the sequential gearshift of the six-speed Sadev ’box, the other a hydraulic handbrake. Combined, they form a kind of medieval instrument of torture for tyres, but a contract with Toyo should ensure Block has plenty of them in reserve.

There’s not a great deal else to add – it’s simply a damn good video featuring some impressive driving on one of the world’s most dramatic roads. Riding on board with Block probably isn’t as scary as dicing with tourists and buses during the week, though...