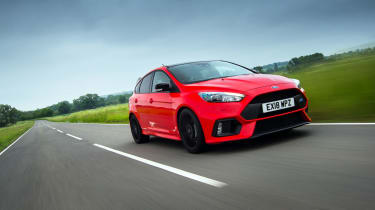 As Ford begins to wind down production of its all-wheel-drive hyper-hatch, the Focus RS, it’s treating us to a few run-out editions. First there was the plain ‘Edition’ (an RS with a matt black roof, black mirrors, Recaro shell-backed seats, carbonfibre trim and a Quaife limited-slip differential). Then Ford decided a jazzier option was needed and released this, the Red Edition. As you’d expect from the name, this version is much like the regular Edition, only painted red. It has the same LSD, the same seats and a black roof, although this one is gloss, rather than matt.

But the special editions don’t stop with this car, as there’s a final, even glitzier RS – the Heritage. That orange-coloured car not only has the Edition’s diff, it also has a collection of Mountune upgrades. Why mention the Heritage? Well, this specific Red Edition has all the Mountune tweaks that you’ll find on that model, and it all combines to create the best Focus RS yet. 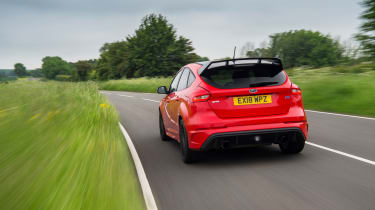 The Mk3 Focus RS in any guise – the regular car, the Edition or this Red Edition – is a technical feat for a hot hatch; it really is remarkable. Its GKN Twinster four-wheel-drive system, which helps give the RS its unique character, works in a similar manner to most transverse-engined four-wheel-drive cars where a propshaft is continuously driven from the gearbox to the rear axle. At that point, on Haldex-quipped cars rather than ones with GKN systems, a pack of clutches closes to engage the back axle whenever all-wheel drive is needed.

The RS differs to this by having two clutch packs after the differential (a continuously driven, locked-spool diff) that can engage each rear wheel individually. So, the outside rear wheel can, essentially, be directly driven by the gearbox if the car so wishes, for example, to aid agility or make the car go sideways in Drift Mode. The back axle is also geared two per cent faster than the front wheels to exaggerate the effect the rear wheels have.

The front wheels of the basic RS are driven like a conventional front-wheel-drive car, through an open differential. Given the complex workings going on at the back of the car, this seemed adequate. But the team at Ford Performance saw a benefit of adding an automatic torque-biasing differential from Quaife to the front axle to help add more control and improve traction even further. 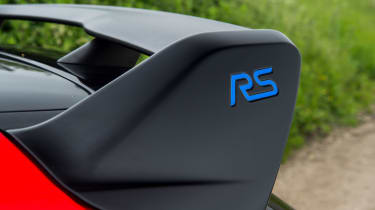 Mechanically, the Red Edition’s engine is identical to other RSs – it’s a 2.3-litre turbocharged four-cylinder EcoBoost motor. In its basic guise it produces 345bhp and 347lb ft of torque, just like the regular RS. However, as mentioned above, this Red Edition has been fettled by Essex-based Ford tuner, Mountune. The engine now puts out 370bhp and 376lb ft of torque. Ford doesn’t quote a faster 0-62mph time for Mountune-modified RSs, so officially it’s just as fast as a regular RS, hitting 62mph in 4.7sec. However, it’s suspected that the diff, the extra power and the added torque can cut 0.2sec off the acceleration time.

There’s one clear, immediate and very welcome difference between the Red Edition and every other Focus RS we’ve driven. It isn’t the effect of the diff, it isn’t the carbonfibre interior trim and it certainly isn’t the red paint. It’s the way it rides. Ford doesn’t say there are any upgrades to the Red Edition’s chassis, by either itself or by Mountune, but whatever subtle change has been made is noticeable.

The regular RS is difficult to love when driving at a relaxed pace, constantly bouncing over even the smallest of lumps and bumps. The Red Edition, by comparison, remains calm most of the time, smoothing out a lot of the road. It’s hardly plush – you can sense there’s not much give in the tyres and springs – but by being just a shade more serene, the RS Red Edition is a far more enjoyable car to live with.

If you’re foolish enough to prod the damper button on the left stalk, or select the Race driving mode, the RS is as bouncy and as uncomfortable as it ever has been – that setting is best suited to a smooth circuit. 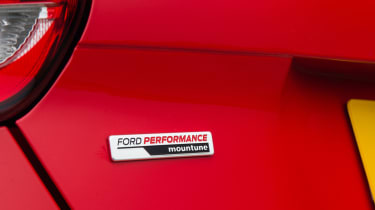 Where the regular car and the Edition excelled was when you really started to attack a road. The jostling ride would work with the hyperactive drivetrain to make a super-agile and deeply involving drive. It required a lot of attention, but it was fun in an unsophisticated and boisterous manner.

The Red Edition isn’t quite so ragged; the calmer ride instills a more peaceful quality throughout the car at every speed. This fresh approach hasn’t eroded the car’s pace, grip or even involvement, but it has toned down that now-typical RS feel.

You can still sense the four-wheel-drive system push and pull the car around, but it isn’t quite so obvious and, as a result, it’s a little less contrived. For example, the regular RS overdrives the rear axle in an attempt to make it feel more rear-wheel drive, but the effect never materialises into anything that needs driver correction. The diff-equipped car shares its drive across both axles more effectively; as a result you’re not tricked by how the car feels and what it actually does anywhere near as often. Overall, that does make the Focus RS Red Edition feel a bit more ordinary. Fans of the Focus RS’s hectic behaviour might not like it as much, but its abilities are spread over a far greater range now.

With a new-found grown-up attitude, the RS Red Edition is a car that can start to challenge the Volkswagen Golf R for decorum as well as fun. The RS is still not as classy as the VW – not in the way it looks, feels or drives – but it’s as close as it has ever been.

However, no matter how much more sophisticated the Red Edition is it cannot challenge the Honda Civic Type R for all-round ability. The magical chassis of the Honda, that’s unmatched by cars over twice the price, means it’s still ahead of all other hot hatch competition.