The first tuned RS arrives, with 340bhp – and that’s just for starters… 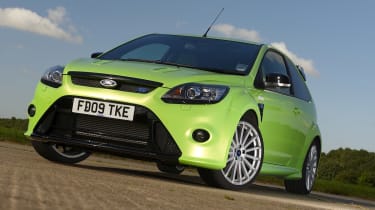 It was only a matter of time. A little bit of light electronic hacking and the Focus RS now has even more power for the front rubber to deal with. We can only assume there must be some sort of competition in tuning-land to be the first to bust open an ECU, have a rummage around and offer the results to owners, especially when the car in question is one like the Focus RS, very much a ‘now’ car and turbocharged too, which is always good for gains. So congratulations for getting there first, Superchips.

Graham Goode Racing uses Superchips’ Bluefin handset to upload the new software through the RS’s data port, the only underbonnet change being a stiffer air intake pipe. That’s optional, but recommended because it helps prevent negative pressure building up between air filter and engine, which can cause the standard pipe to collapse in on itself at high engine loads.

As you’d hope, it’s a bit faster. Objective analysis first. At the Bruntingthorpe Proving Ground we manage to lop 0.3sec off the 6.0sec 0-60mph time we recorded in our long-termer, and a far more impressive 0.9sec from there to 100mph, the GGR despatching that increment in just 7.5sec. 0-100mph? 13.2sec plays 14.4.

Worthwhile gains, then, but it’s the way this power is delivered that makes the upgrade compelling. In a standard RS the real fireworks only happen beyond 5000rpm, forcing you to hold on to each gear to really get the most from the roaring 2.5-litre. Not any more. From 2750rpm onwards the GGR340’s torque and power curves climb well clear of the standard car’s, giving you extra mid-range might you probably didn’t know you were missing. It subtly changes the way you drive the car, and because the extra power arrives earlier, the front wheels aren’t put under too much extra pressure. Torque steer is no worse than in the standard RS, but it’s still a hard car to drive smoothly.

It’s worth remembering that the work will invalidate the Ford warranty if detected, although GGR believes this is practically impossible. The firm’s next stage would be hard to explain away at the dealership, though – 370bhp, using the same chip upgrade but adding a carbonfibre airbox, larger intercooler and new exhaust.

As we understand it, Ford is highly unlikely to offer its own officially sanctioned upgrade (even though Mountune is known to have already developed it), forcing power-hungry owners to run the gauntlet of the diagnostics machine come servicing time. Whether it’s a risk worth taking is down to you.